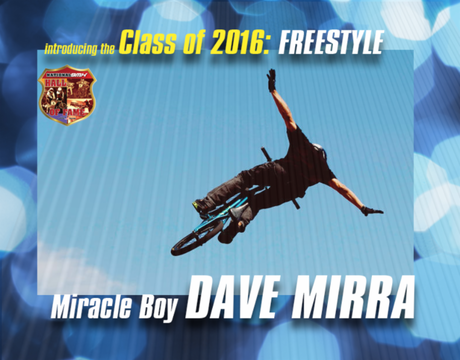 In February of this year, the sport of BMX lost a true legend.

It is safe to say that no BMXer has ever reached the recognition, fame and notoriety that Dave Mirra has.
Up until 2013, the Miracle Boy held the record for most X Games medals - having medaled in every X Games from the first one in 1995, up to 2009.
To say that Mirra took freestyle riding to a skyscraper-height level would merely be an understatement. Totaling an incredible 24 X Games medals, he is tied with Tony Hawk in reaching the first 14 medals the fastest. From winning an ESPY Award for Best Male Action Sports athlete to being named one of People Magazine's 50 Hottest Bachelors, to hosting M-TV's Real World / Road Rules Challenge and being featured in the popular video game Dave Mirra Freestyle, he truly became a household name - and put our great sport in a limelight never before achieved.
When Mirra moved to Greenville, North Carolina - building the ultimate riding compound, and bringing many of the sport's top athletes with him, the city became known as "Pro Town." In 2007, he chose to break out on his own and start his own bike brand - MirraCo, and following his BMX retirement went on to race Rally cars for Subaru.
Although his is a life that was ended way too short, there is no doubt that Dave's achievements and contributions to BMX, and his riding legacy, will forever live on and continue to inspire all.