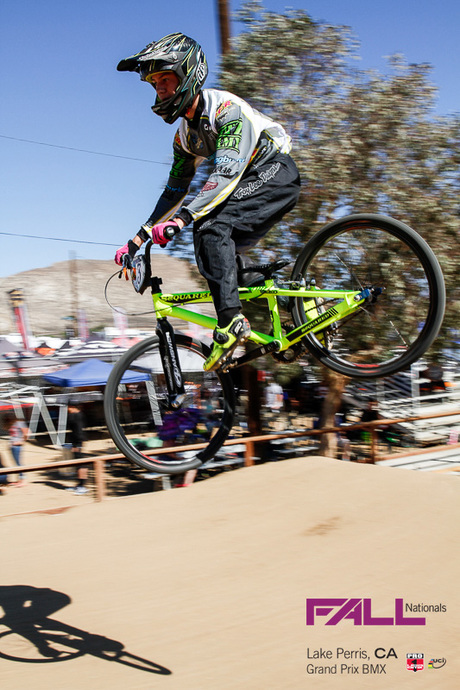 The triumphant return of the Fall Nationals to Southern California is complete. It has been 12 seasons since that rainy weekend at Del Mar but people were really stoked on it being back in the birthplace of BMX. Mike Redman’s Grand Prix BMX played host this year and the track, complete with a barrel gate and fresh asphalt corners, was a hit with the participants.

We’ll kick things off with the only triple-triple of the weekend, one Mr. Jason Morris. Morris has been on a lot of people’s radars ever since he destroyed 19-27 Expert at Grands as a 27-year-old last year.  No much changed, especially with him being on his home soil. Despite his victories he still sits in NAG 3 going into the season finale. Only time will tell how he will handle the Tulsa pressure cooker.

Top 15 Expert Jesse Welch was so excited about this weekend that he showed up on Tuesday to help get things set up for the race. “The Phenom” looked almost as unbeatable as Morris but as luck would have it a little rain would ruin his unbeaten streak, as Hostile Elite’s Aram Schwinn would nab the victory on Sunday.

Coming up just one win shy of a triple-triple was Answer Rennen’s world champ Karter Montellano. The “K-Man” got his 7th national win on Cruiser Saturday and decided to leave it put away for day two. 5 wins at a national in the heart of So. Cal is always respectable though.  He’s definitely the favorite going into the Greatest Race on Earth.

The Elite “locals” did their thing as well. Joris Daudet took over the points lead after his convincing win on Saturday. What was even cooler was having his good friend Marvin Musquin in attendance. Marvin didn’t make it out on Saturday, as he was busy winning the Red Bull Straight Rhythm over in Pomona.

It’s no secret that Maris Strombergs likes to grab outside gates when he’s feeling “on”. Day two was no exception as the machine looked to better his third from Friday night. Gate went pop and Maris quickly found his way to the front, from gate 6. The two time gold medalist definitely still has it.

A lot of people wondered if we would see an appearance by Alise Post this weekend, with her being in Colorado by her fiancé’s Sam Willoughby side during his recovery. We got our answer on Friday as she arrived at the track and jumped out of her car, helmet already on, and headed straight for the gate for his first moto. She’d grab a 2nd and move on in the program.

The real star of the Elite Women’s class was Visalia, CA native Brooke Crain. After a rough few weeks on the World Cup tour, the insane one would have one of the best weekends of her career and highlight of the 2016 season. She looked hungrier than ever on her way to winning the class both days. ROC and Grands will definitely be interesting for the ladies.

On the Cruiser front, Bombshell’s Cory Lebaron was the man in 7 & Under, grabbing two more wins on his quest to better his ranking. Answer Rennen’s Marshall Gehrke picked up a couple of wins in he 9 year old class and moved himself into the drivers seat for the National #1 title.  Ty Beadle and Robert Connelly split wins in 10 Cruiser. Tucson’s Sammy Montijo’s win on Saturday night put him in position to contend for the NAG title in 13 Cruiser in just a few weeks.

Saturday night he ladies put on a show in 14 Girls. Natalee Daugherty jumped out to an early lead but McKenzie Gayheart was lurking close behind. Skittles would make her move in the second turn and never look back. Leyna Jones would sneak in for the second and Daugherty would fall all the way back to fourth.

Despite the curveballs Mother Nature tried to toss at us, everyone had an enjoyable time at Grad Prix BMX. We can’t wait for the next one.