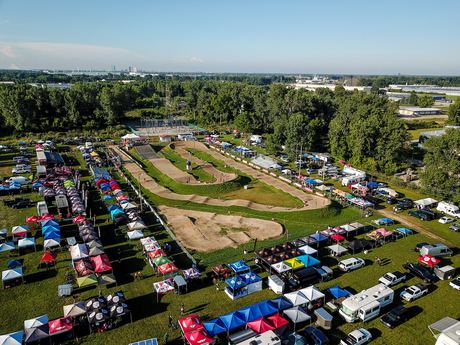 Toledo Speedway BMX played host to the 21st stop on the USA BMX National Tour and the event was simply awesome. Saturday was packed full of action with 188 motos of racing. The battle in Pro open was epic as 8 men took to the track and put on a show for the fans. Mudslingers'

Olijuwon Davis stayed consistent through the three motos and came out victorious. Second place honors went to Powerlite's Nicolas Palacios Munoz, and the final spot went to Ohio's own Josh Smith. The interesting thing about that podium is that two of the three racers are also school teachers (Davis and Smith). Josh headed out after the race to prepare for the first day of his 5th-grade class.

On the amateur side of things, we saw someone going way fast in a stock Fly uniform aboard a DK in 16X. Come to find out it was none other than factory DK's Spencer Cole whose luggage didn't make it on time. He didn't let it bother him one bit and took the win on a borrowed bike. What a hoss.

We hate to say that we told you so but we did. Seven-year-old Ellie Carey won 10 and under Girl Cruiser both days. We've been keeping a close eye on her since she showed up with a 24" and this weekend she delivered. The rest of the class should be on alert. She's only going to get faster.

It’s been quite a while since we’ve seen Golds Gym’s Tristan Judd. The Texan made the trek up north in an attempt to better his NAG ranking (he was sitting 44th coming into the weekend). He made an unexpected exit on Saturday during the quarter but persevered and came back to win the class on Sunday. We’ll all be watching to see if he can claw his way back to the top ten. With only a handful of events left before Grands, he has his work cut out for him.

And with that, another memorable weekend has come to a close. Be sure to check out the video coverage on our Facebook and Youtube channels. The next stop on the USA BMX tour takes us to the land of Sasquatches, Washington state for the Lumberjack nationals. We’ll see you there.