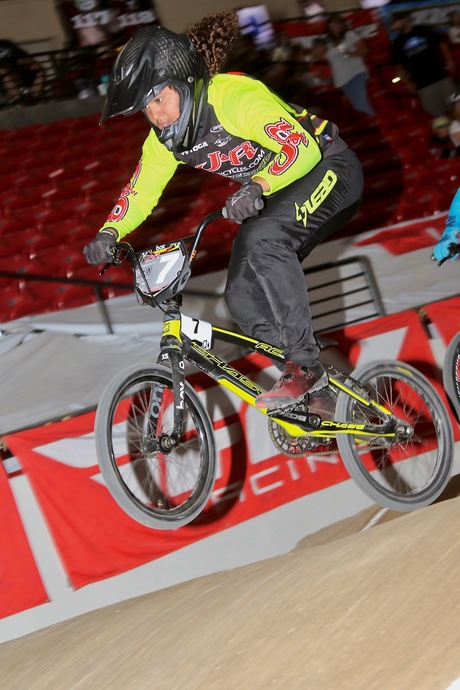 700' TO GO:
The summer-time Indoor stop in Las Vegas always draws a huge turnout. Whether it's because everybody wants to escape the heat and return to a cool air-conditioned arena, or whether the kids love short-track racing (this year's track measured out to 70-feet exactly), or perhaps its due to parents wanting to partake in all that 'Vegas has to offer - July's Las Vegas tradition is always on everybody's to-do list.

Turnout for this years' Las Vegas nationals was 268 on Friday, nearly 300 on Saturday (298 to be exact), and 263 on Sunday. Being the King of Short Track racing, the fastest laps on the 700-foot long course hovered around the 20 to 22 second mark. That's a FAST lap, folks! Thanks to fast laps and few crashes, Friday night's race was over by 8:00 - leaving the BMX masses to flood the South Point restaurants, game rooms, bowling alleys, movie theatres and casino.

MISSION IMPOSSIBLE:
By far, the biggest story of the weekend was the Bakersfield-scenario revisited. As you might recall earlier this year, BMX Shark rider Cedric Cade nearly beat Box's unbeatable one; Mr. Ronnie Kim - the reigning National No.1 Amateur in USA BMX. As seen in the SNAP spread in PULL magazine, Cedric was beating Mr.Undefeated up until the last jump, in which is took the high road while Ronnie stuck to the low road and nipped him at the finish line. "WHEW!" Ronnie must've thought. That was a close one.

It's not that anybody - including all of us, had any ill-will toward Mr.Domination. It's just that when a rider wins so often, you can't help but start rooting for the UnderDog. Everybody wanted to see who it would be to step things up. Who would be the Davey to take down this Goliath? 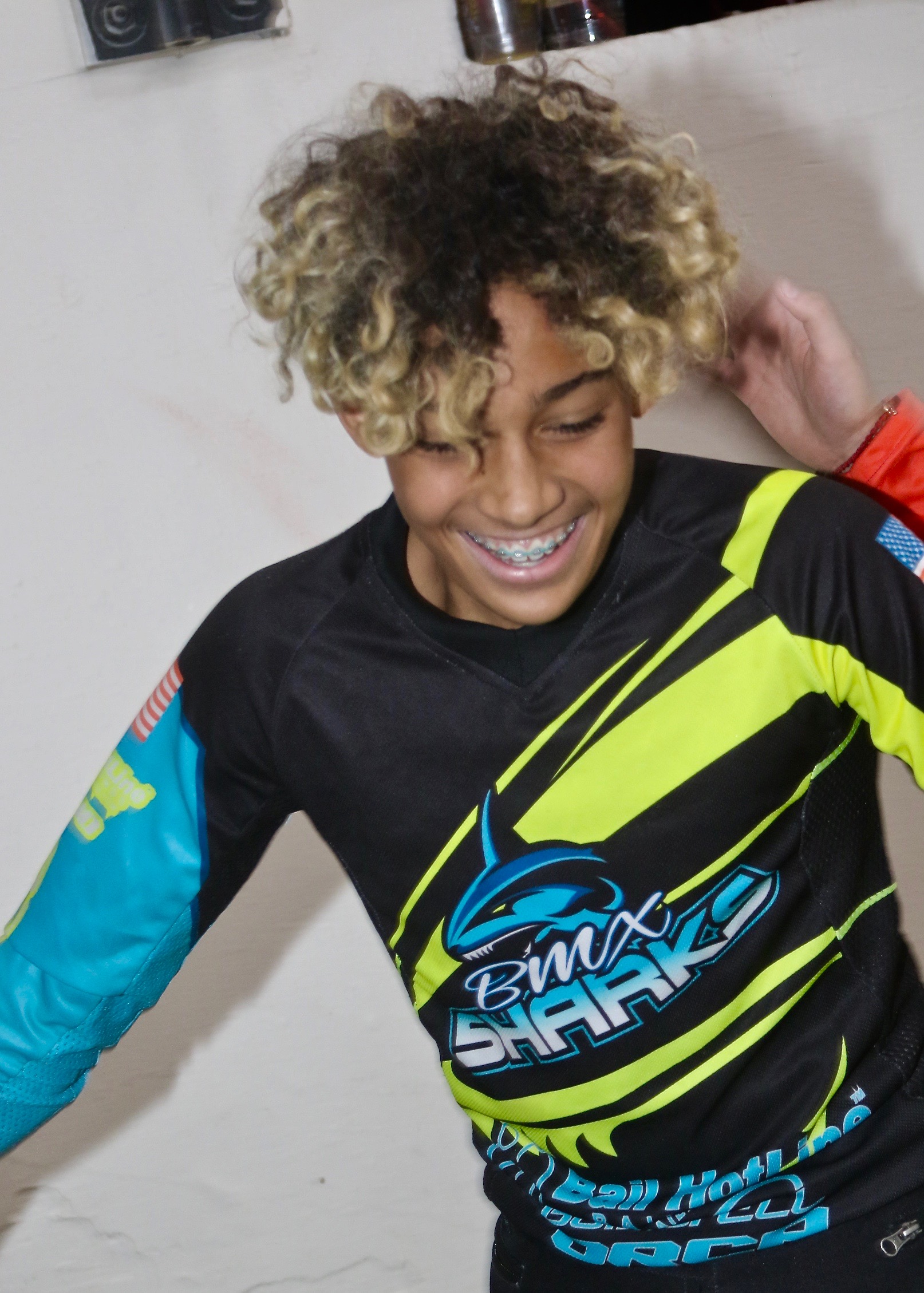 What many might not know is that Ronnie's current win-streak dates all the way back to the Blue Grass nationals in Kentucky. Waayyy back to January 2017. That's right - Ronnie Kim has been unbeatable / undefeated for the past 2 1/2 years!

Las Vegas is home for BMX Sharks' Cedric "The Entertainer" Cade, and after the Bakersfield flub, he and every BMX fan in the country, has been looking forward to the next re-match. Being on his home-turf, only upped the ante' and added pressure to the match-up.

On Friday, Cedric scored yet another 2nd place behind Kim. In Saturday's main, The Entertainer went down in flames, and wound up with an eighth. But Sunday - his last show for Bako redemption, Cade pulled through like a Champ. As Cedric grabbed the lead, the entire South Point arena roared with excitement. Ronnie must've blown his gate, because he found himself in an extremely unusual spot (called mid-pack). it was a place he hasn't visited in a loooooong, time. With only 700 feet to make some magic happen, Ronnie would be make up a little bit of ground and move into third - as meanwhile, Cedric was flyin' out front to an explosion of applause and emotion. Crossing the line, Cade was overwhelmed with congratulatory high-5's, hugs and slaps on the back. He'd just accomplished what no rider has been able to do in over two years. To many riders his age, Cedric just did the Impossible.

To our No.1 Amateur, Ronnie Kim - you could see the disappointment on his face. One of the longest win-streaks that BMX has ever seen had just come to an end. While we celebrate Cade's victory, let's not forget that Radical Ronnie's 2 year, 6 month win streak will be noted in the BMX History books - and should not be forgotten.

There is no doubt in everybody's mind that Ronnie Kim will start all over, now at Zero, with another amazing win streak - and hopefully it'll begin at the UCI Worlds in Belgium, where he is headed to next, to defend the W#1 that adorns the back of his BOX jersey.

CHASING A NO.1 AM TITLE:
When the USA BMX crew returns from any national, the following morning is usually spent hanging out and getting the play-by-play from the weekend. After 'Vegas, all of the breakroom discussion was about the 17-20 Expert mains. Aussie Kye Affoo, now back in the States, picked right up where he left-off last November (which, if you recall that Grands main, that'd be the infield of turn 2). Affoo was on fire for Full Tilt and scored the wins on both Friday and Saturday. But the real battle, behind the scenes was for second place - between Throdwn's Jesse Welch and Affoo's team mate Race Lee. They'd gone at it earlier in the semi's, putting the lean on eachother in the tight 'Vegas berms.

After Affoo scored two wins, he'd hurt his back bad enough to pull out of Sunday's racing. Most likely, this would leave the top of the podium up to Welch or Lee.

MULTIPUCATION:
This year, PULL magazine has been tracking the multi-winners from each race, so that we can tally up the triple and doubles for the entire season. With the Las Vegas Nationals being a 3-Day'er, and being a short-track race, the big question to be answered is: Will there be more, or less, doubles and triples at this one? 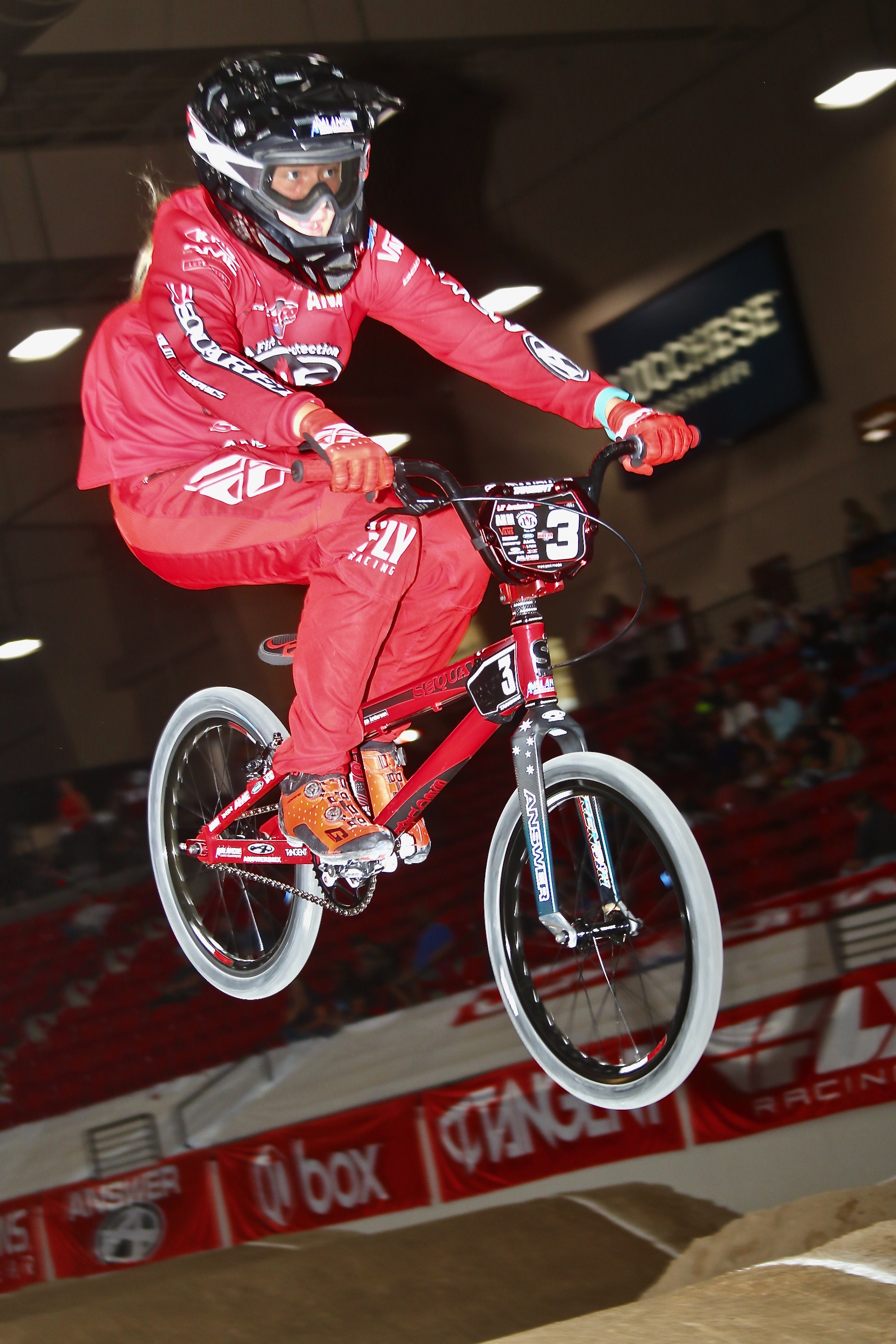 Triples are nothing new to this month's PULL cover-girl, Dan1ca Anderson. And once again, she scored three wins a day, for three days straight.

On the other hand, a person who is usually more concerned about having fun than he is getting a win, is another 2nd-generation racer named Shane Harlow. The Elite rider is best known for his dork videos and winning online #StyleChecks. We're not quite sure of the whole story from the Elite-Vendetta Camp, but somehow Harlow lost a bet and had to pay the price. The wager? Well ... he had to race his main wearing a bra overtop his jersey.

From Lane-8, he had his work cut out for him - especially on a 700-foot short-track; not to mention the annoying contraption strapped to his chest. Harlow exited turn one in third place like a podcast (railin' the berm - get it?). Down straight-two, one rider exploded right before Shane's eyes but he managed to dodge the carnage and set himself up nicely for a turn two dive-bomb. It was a picture perfect, text-book  high-low move, and Shane and his lacy skin-toned bra were now out front - much to the crowd's delight.

Feeling a bit confident - and purty, Harlow hammered thru the rhythm and blasted into the final turn with a comfy lead. But suddently, his tires decided to get loose, and Sharn slid out at the exit of the turn. In second place, his Elite teammate Jake Shepard, slammed into his bike and flew OTB for about ten feet, as the third place rider did just about the same. Amazingly, as if he had ViceGrips for hands, Harlow never once let go of his bike and once he somersaulted back to his feet, he was still holding tight onto his Vendetta - and was able to cyclo-cross it the rest of the way to maintain the win.

Not only THE win for the day, but it was the third win of that day, and the third day he'd done so! Yup, the guy who seems to barely care about winning - WON, and simultaneously had a ton of what he came here for - and that is FUN.