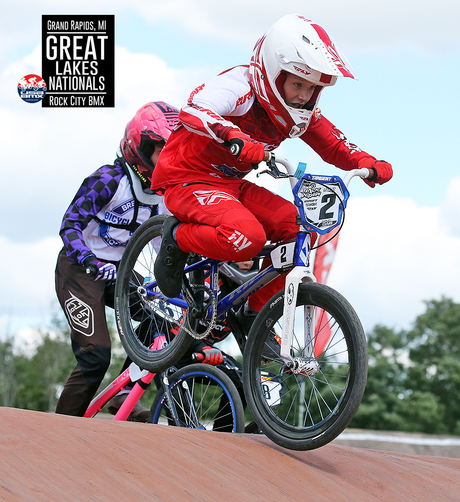 My ol' roommate Lew (Freestylin' Asst. Editor and BMX icon) was from Kalamazoo. That's in Michigan, if you don't know. Like most Michiganders, when he was asked "Where the heck is Kalamazoo?", I witnessed him doing the typical Michigan hand-map. That is when someone asks a person from Michigan where they are from, and they break out the palm of their right hand.

The shape of your right palm resembles Michigan's Lower Peninsula. (You can also bring in the top of your left hand for the Upper Peninsula, but we won't go there for this story.)

If you live in ... let's say, Lansing, you'd point to the middle of my palm. Detroit? That'd be the base of your thumb. Or, if you ask a real hardcore Michigander, they'll go into detail about how their thumb outlines the east side of Saginaw Bay and the pinkie represents the Leelanau Peninsula.

Water surrounds these fingers and thumb, which explains why this weekend's race is called the Great Lakes National. Here's a visual... 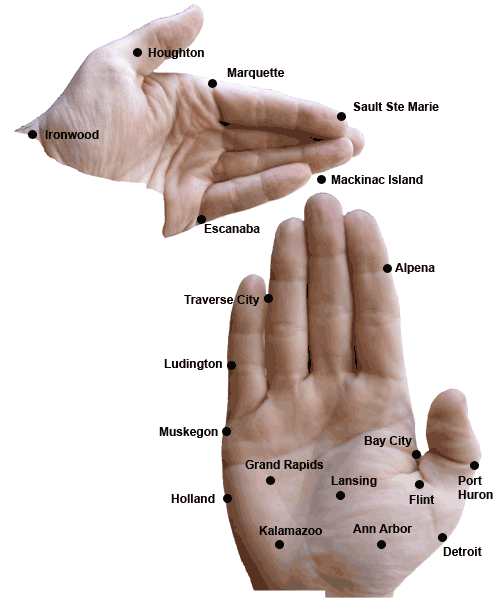 So - before I headed off to Grands Rapids for this year's #GreatLakesNats, my wife asked me "Where is Grand Rapids?" To be honest, I wasn't quite sure - so I looked it up on Google and then proceeded to break out my trusty Michigan "hand-McNally" map.
"It's about here," I said - pointing toward the middle of my palm, a bit below where my pinky finger begins. 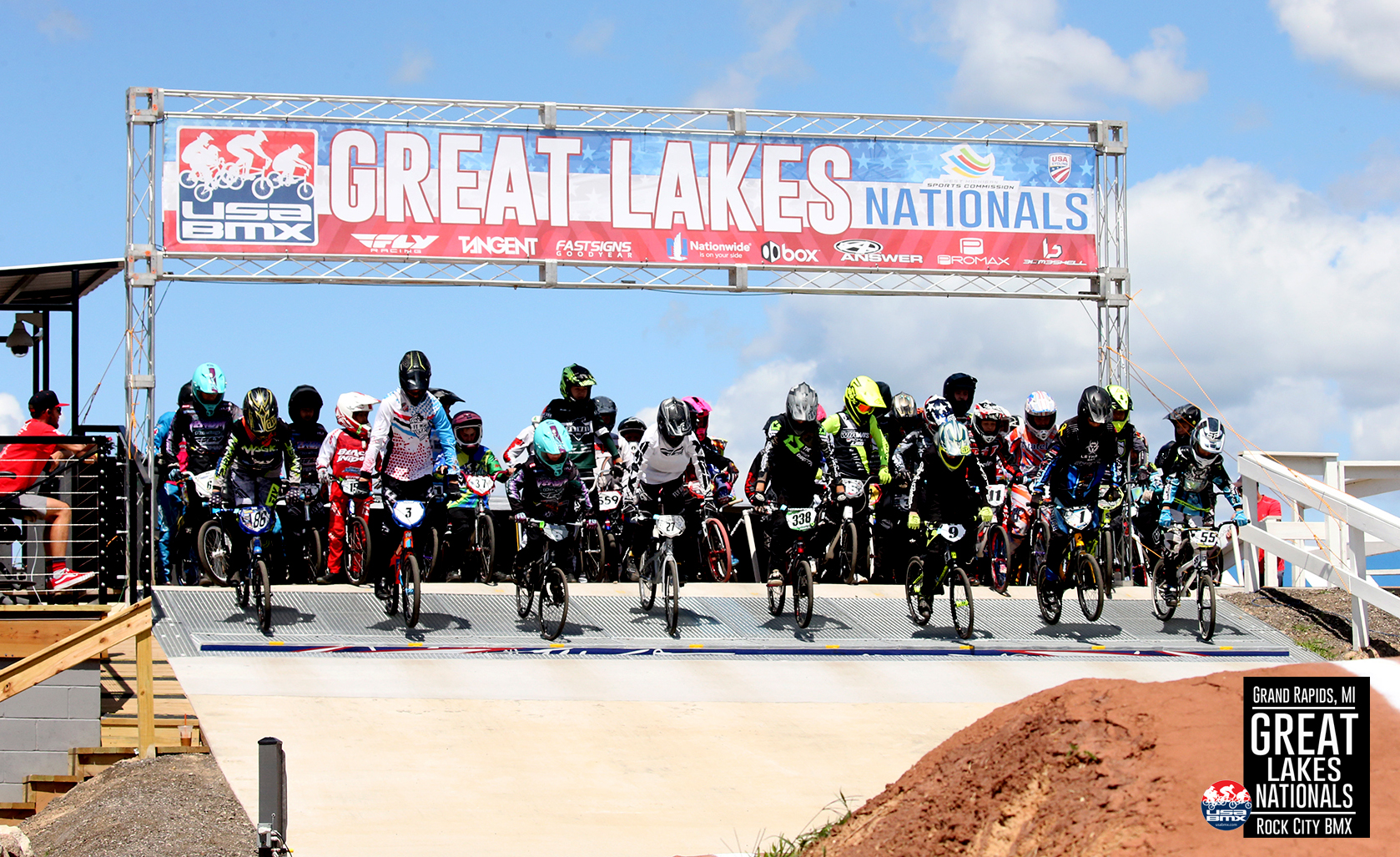 So now that you know where Grand Rapids is; the next place you need to find is Rock City BMX; which technically - is actually located in Rockford. No; not the Rockford most BMXers are familiar with (that is in Illinois). This 2nd Rockford national of the season is in Michigan. Again - just break out your right palm and take a glance.

The #RockCityBMX track is sweet; and has only been around in this particular location for about six years - and is operated by the entire Salsbury family (including Noah and Abbey), along with an awesome crew of volunteers and local riders. Since opening, they've made huge improvements, including a barrell gate, storage container under the starting hill and a split decision maker down the third straight. The track is basically a U-in-a-U, but the outside "U" is long and dog-legs on the rhythm-packed third straight. As it turns out, that dog-leg would even things up nicely and it wasn't unusual to see riders come out of the last turn 2-abreast and often 3-riders side-by-side, sprinting it out to a close finish. Rock City, does indeeed, ROCK!

Saturday's action was intense, with some very close finishes at the white stripe.

Some of the fastest 10 year olds in the country were in MIchigan and they put on a show. In cruiser, unsponsored William Edmunds grabbed the holeshot, and led the race until the last turn. C-Yaa's Mason Hayes didn't get the best start of his life, and was in third place down the first straightaway, but swooped in hard to the inside of the first turn, to move into second place. That move bumped WIA/WIS' Rowdy Holzer to third, but he stuck to the back tire of Hayes as if he was covered in Gorilla tape. Through the rhythm, both Rowdy and Hayes reeled in Edmunds, and Mason went for another killer inside move in the final corner, to take over the lead. Meanwhile, Rowdy was up high, but suddenly hit the Turbo button and aimed to the inside, passing Edmunds and catching up with Hayes for a super close push at the line.

Hayes, with a solid push, held on for the win by less than an inch!

After such an exciting Cruiser-round, you'd think they might've used up all the juice in their batteries and had nothing left for class. C'mon - we're talking 10 year olds! They've got plenty of energy to last all day.

After getting nipped at the line on his 24", Rowdy was fired up and holeshotted the 20" main; but again had the C-Yaa ripper ridin' on his back pocket. Hayes did his best to close the gap, but C-Yaa'er just couldn't get close enough to the We-ya whizzer this time.

Not to be outdone with the thrills, spills and close-racing, the 12x's lined up, after eliminating half their field (of 16) thru motos and semi's. In the final showdown, Big Joe Martin - the Ssquared flyer from Pennsylvania, snapped hard from lane 5 and got over as soon as he could to nab the lead.
As they blasted into turn two, Martin was feeling the heat from FullTilt's Noah Colburn (on his inside) and Primal racer Chayse Mrazek on the outside. But suddenly, right at the knee of the dogleg, "Hot Sauce" Joe got a little too far over the front end and nose-wheelied down the backside into a classic 70's-style Endo-mumph. Colborn veered to the extreme inside, having to dodge flying debris, while Chayse had to duck so far off to the left that he wound up eating dookie alongside the fence.

From there, it was all Nolan Colborn's race to win or lose. That was an exciting one!

Not to be outdone with even more thrills, spills and close-racing, 13x was up next. From a far outside lane, it was Black Widow riders Smith and Isaacs with the pop - and a hungry hoarde of furiously fast 13x's all dicin' and slicin' down the second straight. Now with a comfy lead, North Dakota's Brock Smith had the lead but looked as if he hit a rut in the turn of a AMA outdoor - sending in OTB, splatting on the pavement right in front of the rest of the pack. The Double-E of Ethan Eller (a featured CARVE rider in PULL magazine), attempted to swerve around Smith, but wound up hitting the carnage head-on. Up high, Kian Grabinski narrowly escaped the wreckage and took over the lead. Smith's Black Widow teammate Cole Issacs went high and found himself in second place and two more racers piled into Smith.
The race was now Grabinski and Issacs, and we'd soon find out who wanted it more - as the Black Widow flyer in second reeled in Kian like a 10-pound Bass, and snagged him at the stripe to score the victory. 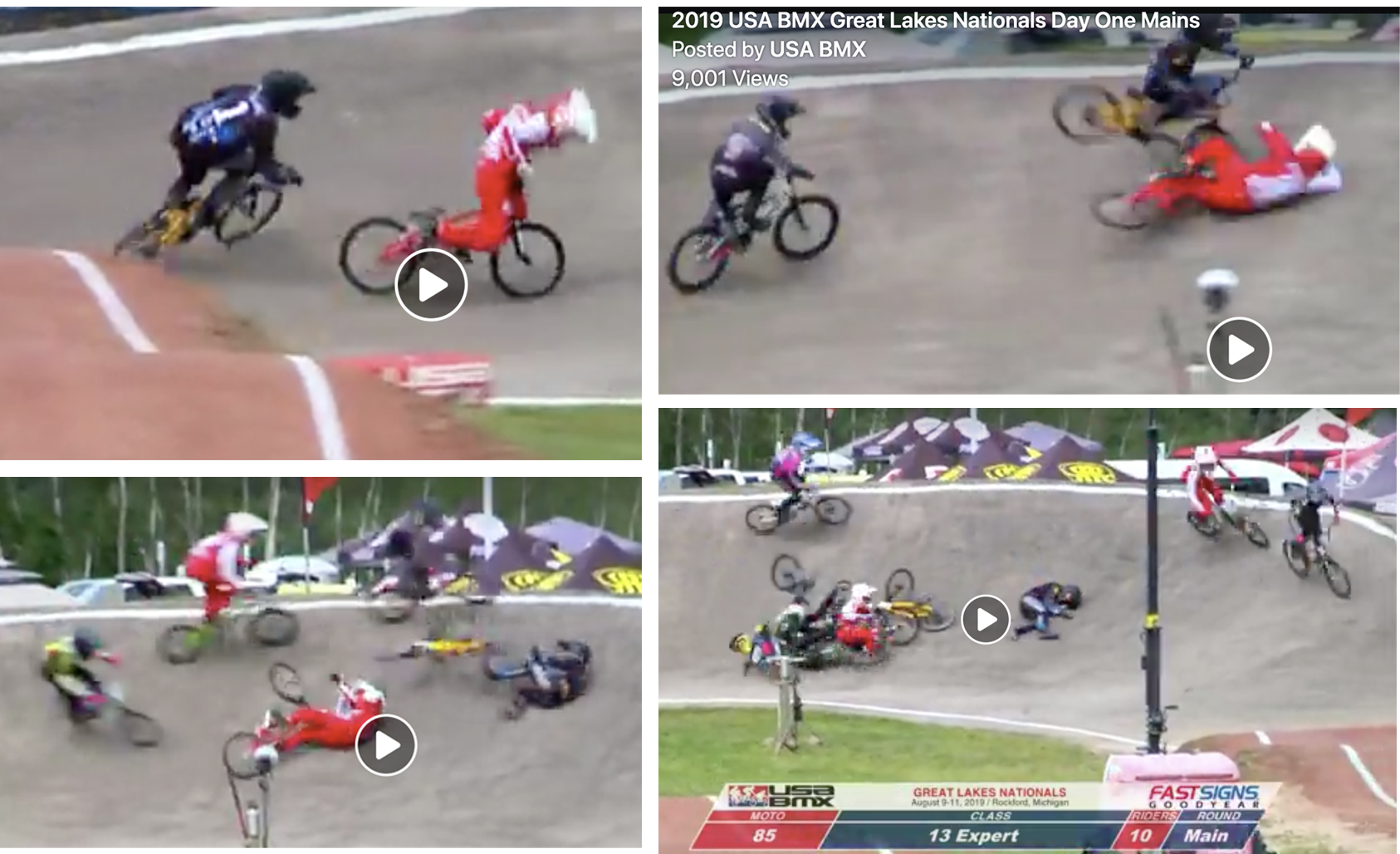 INSTANT REPLAY (above): Black Widow'er Brock Smith was pretty stoked to be out front of the 13x main - after snapping from lane 7. He then over-launched the doubles into turn one, and then got all wonky in turn two, before flying over the bars to cause a chain reaction of flying bikes and bodies. Nascar has nothing on us!

The largest class of the Experts? With 22 rippers, that'd be 17-20X - and it was bound to be a barn-burner! The Dive-bombers were out this weekend, as Rock City's first turn is low and lean, and that leaves plenty of room on the inside to get underneath those who are full-blasting the high line. In the 17-20x main, it was former Free Agent teammates Plummer and Antil out to the front (and up high) as two dive-bombers tried to sneak in on the inside. Daylight'eer Caden Bowers slip-slided away mid-pack, colliding with Kamakazi Lucas Mallory of Albe's. They both took a roll in the pavement as the rest of the pack somehow swerved and avoided tangling up.
Now out front, Plummer had a comfy lead but Antil was on the gas! So much on the gas, that he almsot whicksey-throttled it coming out of turn two. That bobble would help The Plummer to stretch his lead even further to take home the big win of the day.

Most exciting race of the entire day? While we were eating a TGI Fridays after the race, the entire staff voted unanimously that it'd have to be 45-50 Intermediates!  All eight of these guys were racing so tight, you'd think it was the final lap at a Nascar race, after they've gone green with one lap to go. These guys were packed like sardines, all the way to the stripe - and came across the line nearly 5-abreast! Completely even race, with riders of equal speed and skill! That is what makes USA BMX classifications so fair.

In the end, Glenn Simmons held on to his lead - narrowly, as locasl Ronald Heath and Chad Lloyd crossed the line closely for 2nd and 3rd.

INSTANT REPLAY (above): Leader Glenn Simmons (the "Man in Black"), spots Heath on his left but can feel the heavy breathing of six other riders on the back of his neck. Down the last stretch, the entire race of 46-50 Inters did their best to attempt BMX's first-ever 5-way tie at the line.

The #GreatLakesNats was awesome; held under perfect weather conditions and surrounded by a crowded, cheering sidelines and bleachers who showed their apprecriation for all riders. Everybody was pumped up for a National in Michigan - it's been awhile, and it looked as if everybody in Rock City BMX was having a great time!

I know we did! 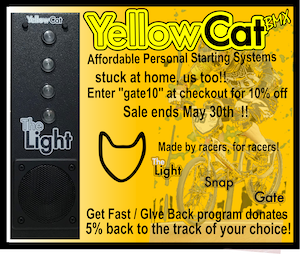