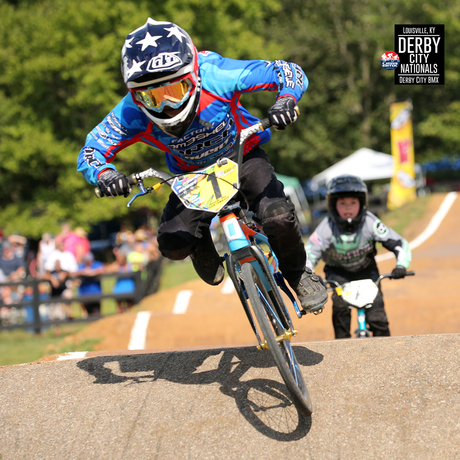 Friday's races were over and Tom Sawyer State Park was emptying out. The RV and camper lots were buzzing about the action that had just taken place in the main events, and more fun was being had amongst the campers. The adrenaline rush was felt from the racers to the spectators - just as it has each year, over the past three decades.

I was hungry and the Chipotle down the road was calling my name. Obviously, it was calling the name of every-other BMXer as well. Walking in, I spotted a couple of ol' BMX friends - fellow Hall of Famer Billy Griggs and super cool mid-school racer chick Chrissy Piper. Piper had won her 41+ Expert Ladies main, while Mr.Bill had snagged third in 46-50x behind Shawn DePrite and Renato Silva. Not bad for Griggs, considering he'd had major heart surgery earlier this year and only got the doctor's clearance to race a couple of months ago.

We sat down over our burrito bowls and reminisced about the legacy of Louisville. Billy fondly recalls the time in 1986, when there was a huge monster-size set of doubles between turn three and four, which he was the firs to clear after BMX Action magazine put up $100 bounty to the first rider to clean 'em. "And I never got paid," he tells me. "But that was because I was amateur, and it was only offered for the pros. They had a tougher time doing it because of the line into it, from the pro section." (For the record, Todd Slavik was the first pro to do 'em, and he did get paid.) One of the most infamous photos of Billy Griggs was taken here at Derby City, doing an X-up'ed one footer on his ProClass 24" when he rode for Mongoose. For me, my stand-out memories range from getting a ticket from Sherriff Bufford T. Justice, for roosting in my rental car, to being here for the final NBL Grands in 2011. That was the final NBL event ever - as the entire sport officially became USA BMX. A pretty significant moment in BMX history, and the beginning of what we have today.

Luhl-ville is home to many things, other than the Derby City track and national. There's this big horse race every year ...I think it's called the Kentucky Derby (or somethin' like that). There's also this big factory downtown that makes wooden baseball bats - "Louisville Slugger."

Each year, the Louisville Sports Commision - who help bring this event to town every Labor Day, joins together with the Sluggers, and has custom red, white and blue bats made to hand out to the Elite Pros, A's and Vet winners. And traditionally, they've gone home in pairs - often, to the Willoughby household. For years, both Sam and Alise had scored 2 bats each, to add to their trophy room. Nobody ever dare break into their house in San Diego; or they'll be met swifty with a Louisville Slugger.

Announcer Erick Grindle stated early on in the weekend, that the "Bats like to go home in pairs." So far this year, the Elite Men's winner has doubled-up every single Pro weekend, and this weekend was much of the same. Connor Fields came to Louisville to earn the U.S. some serious Country points and to inch his way up in points closer to teammate Joris Daudet (who is out on injured reserve until Grands due to his Worlds main crash). 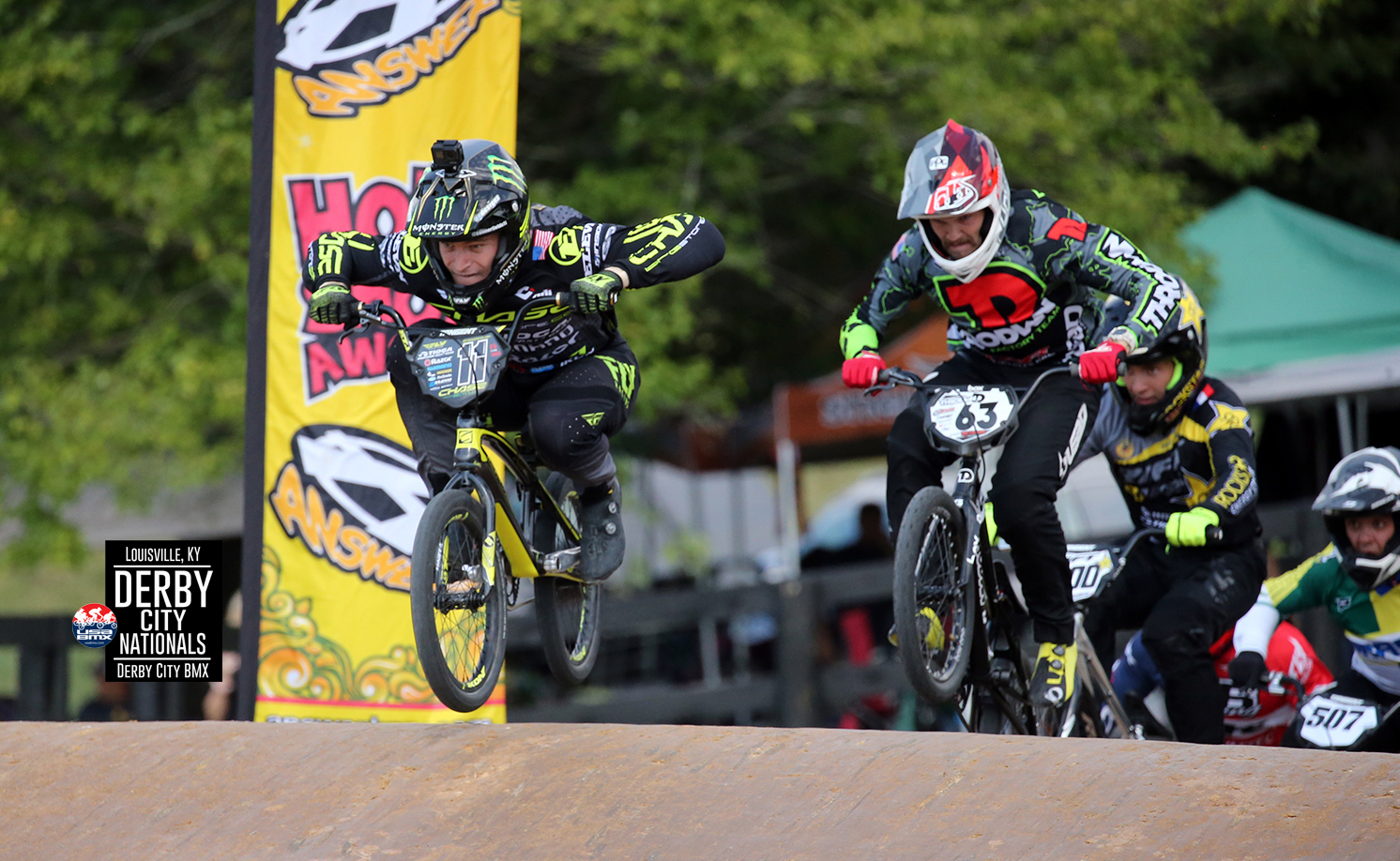 Connor's toughest comp would likely come from Corben Sharrah, who could also use a big bump in USA BMX pro points, to be eligible for the No.1 Pro title in November. The Chase pro was pretty dominant all weekend long, though - and you can tell he loves Louisville's track. In the main, it was six American pros, along with a Brazilian (Souza) and Aussie (Special-K).

From atop the big hill, Fields nabbed the #Answer holeshot award (worth an extra $250 each day), as well as both wins. The real battles in the finals were for second place, as Corben would have to fight off the hard-charges from the Foreigners.

Of al lthe pros, we'd have to say that Brazil's Anserson Souza was looking most impressive, along with Australia's "Special K" - Matt Krasevskis. But in the end, the AA-pro streak of double-winners at every Pro race continued; with Fields doubling up this round.

Just days before the GoPro Derby City Nats, Supercross' Felicia Stancil picked up the keys to her brand new house - calling Indy her new home. Now with a mortgage payment added to her monthly bills, Flyin' Felicia was out to make a few months payments, since first place on the SX tracks pay out $3,000 for a win.

This weekend also marked the return of "The Beast" - who we haven't seen in quite a while. While Alise has been globe-trotting and hitting up World Cups and special events, Stancil and Verhagen have both racked up some points and wins. With Alise back on the scene, in her Rainbow-striped World Champion jersey, she was hoping to pick right up where she'd last left off. After coming unclipped out of the gate in Friday's main, she pretty much handed over the win to Felicia and got stuck in traffic. We can not recall the last time we've seen The Beast get a 5th place in a main; it's been YEARS! 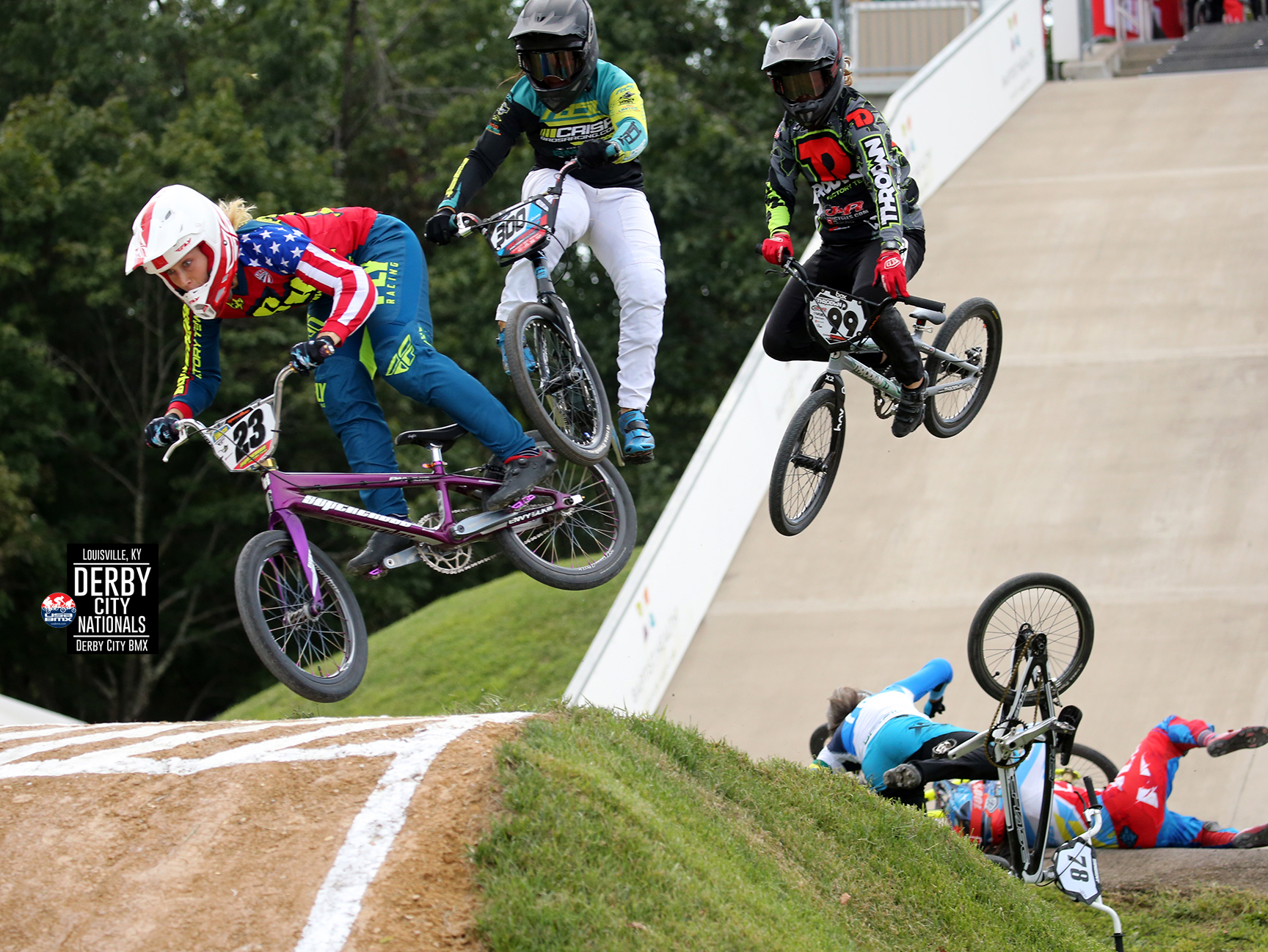 As you can see above, Felicia's weekend didn't start off as planned. This chain-reaction crash, starting with a Brazilian domino that tipped over a bunch of other dominos, was insane. Fortunately, they all walked away from it - including the rider who caused it, who not only walked away from it, but also walked back up to the top of the starting hill to get in the right moto (which was in the gate). CRAZY!

Just to think - Felicia went from this type of "flyin'" - to flyin' in for the win!

On Saturday, Alise and Felicia went at it for Round 2, and from Lane 1, Stancil had Willoughby's number from the start. It was a fair and clean race, and either Alise's rustiness was showing or Felicia's newfound confidence was shining. Either way, it was Stancil taking home a pair of Lousville Sluggers and $6,000 to furnish her new home.

I'm sure that you've noticed this summer (actually, for most of this year), Answer's Marshall Garhke has been MIA on the BMX scene. There's been a few sightings on social media; of him looking like he's 6-foot-7, or taking on the bottle-cap challenge with his back wheel as he whips his Ssquared into a Gatorade.

Everyone still wants know - "Where's he been?" Rumors have been running rampant. Will he be a contestant on The Voice? is he America's next Idol? Will he be "fired" as an Apprentice or be handing out roses as the next young Batchelor? My guess is that he's been out in the wild as a Survivor contestent - ripping around some deserted island on his BMX bike.
All that we know for sure is that he's been up in Canada for some top-secret sports-kids reality show. And if you know The Major well, you know this is right up his alley! The kid loves all sorts of sports and is an all around stud at anything he does.

Well, the soon-to-be-announced reality show had just wrapped up, and Marshall and his dad hit the road to Louisville as soon as he got home; driving down to Louisville to make it on time for Saturday morning practice.

Judging by his results, you never would have known that The Major hadn't raced in months, as he was constantly seen out front of his motos, semis and mains - often throwin' down his usuall variety of style (including some big, boosted bar-humps).

After making the early-season switch from Alpha to Throdwn (right after Bakersfield's Golden State Nats), this weekend would officially be Ava Corley's first "usable-on-a-teamsheet" race. And you know that the Throdwn posse was pullin' for a big win in 13girls.

But then there was Corley's arch nemesis - Ssquared's Grecia Chritodulo; the DeSoto local who has been on fire this summer - tripling more than Danica Anderson and earning yet another Top Gun jacket. Throw in Clayborn's Addison Shreve and Rift's Rah-Rah Romero, and the action-packed final would be one main you won't want to miss.

At 14 years young, we've already lost count of how many consecutive World #1's Tommy Tucker has won. When FullTilt brings in the Aussie future-superstar, he's always expected to be the one to beat. After a Friday win, as usual, everyone assumed he'd do it three in a row ... that is, everybody except for Louisiana's Blaise Pereira - Free Agent's hottest commodity right now.

On Saturday, it was Tucker with the holeshot, but as they blasted side by side down the first straight, Tucker suddenly exploded like an M-80 on the 4th o' July, coming to an abrupt stop at the end of the first straight. This left Blaise all the room he needed from his outside lane to take things over and hit his nitro-boost to get the win.

So - what happened to Tucker in that main? We heard the next day from a reliable source that double-T exploded his clipless shoe. Just too much power, we suppose - and he blew up a shoe. Tucker would return on Sunday, with some new shoes, and another win.

BIG RIDER-POINTS ON THE LINE

Normally, Sunday's rider-count / moto- count drops off. But in the case of 17-20x, it GREW. Why? Because many of these older-teen Ams were competing in Jr.Men on Friday and Saturday - scoring the U.S. some much-needed Country points and gaining some extra experience to chase after their Olympic dreams. Afterall, Connor and Corben are getting up there in age and Paris Olympics in 2024 will likely see some fresh faces on Team USA.

But until then, we've got these ultra fast 17-20x's - who on the BMX Check list, have scribbled in a "USA BMX No.1 Amateur title" a few lines above "Winning an Olympic medal."

For Sunday, the class grew from 37 riders to 42; making a Sunday win HUGE for the points-race 'n chase. A win on Sunday could boost a couple of these guys into the No.1 slot. After killin' it all year in Jr. Men, Arizona's Alpha-male Cam Wood had some rough times off the big hill this weekend. So come Sunday, he was ripe 'n ready for a big amateur win. Just as it has been this year, many times, it'd be the House -vs- Wood show, and it would be a GOOD one!

LABOR DAY MEMORIES
Regardless of who you ask - whether it's a brand new 5 Novie or a seasoned Elite pro and Olympic-medalist like Alise Willoughby or Connor Fields, they all have a favorite Louisville moment (or two, or three). We all do - and many riders this weekend, were making their own unforgetable BMX memory for the first time.

Just imagine, thirty years from now, fifth or sixth generation BMXers hangin' out at a futuristic Chipotle, talking about how much fun they had there in Lou-uh-ville, way back in 2019 - thinking "That was so long ago, but seems like it was just this past weekend."