While most of the non-BMX World is getting stuffed with Thanksgiving turkey, Thursday in Tulsa can only mean one thing: non-stop Practice! The 2019 USA BMX GoPro Grand Nationals are ripe with Intriguing Battles as we close in on handing out seven National No.1 Titles this Weekend.

As the BMX world converges on Tulsa for another ‘Grandsgiving’, there are plenty of compelling title chases that should make for an exciting weekend of racing. To a BMXer, Thanksgiving means the beginning of practice, and the final reps to prepare for their shot at a spectacular end to their season.

AA-PRO
After claiming his third USA BMX National No.1 title in 2018, Joris Daudet was poised to make history with number four in 2019. But after a string of injuries late in the season Daudet will be watching from home as his Chase Bicycle teammate, Connor Fields looks to claim his second title after taking the crown in 2017.

Burt don't count out Daylight Cycles’ Corben Sharrah. The Tucson local is waiting in the wings with only 140 points separating him and Fields as they head into Friday's Race of Champions, before Saturday’s GoPro Pro Championship Finals. There won’t be an empty seat at the River Spirit Expo for this AA-PRO showdown.

Can Corben the former World Champion pull the major upset and take his first No.1 Pro title? Or will the reigning Olympic gold medalist prevail for his second No.1 Pro plate in USA BMX?!
Be sure to watch it all go down - LIVE, at usabmx.com/webcast. 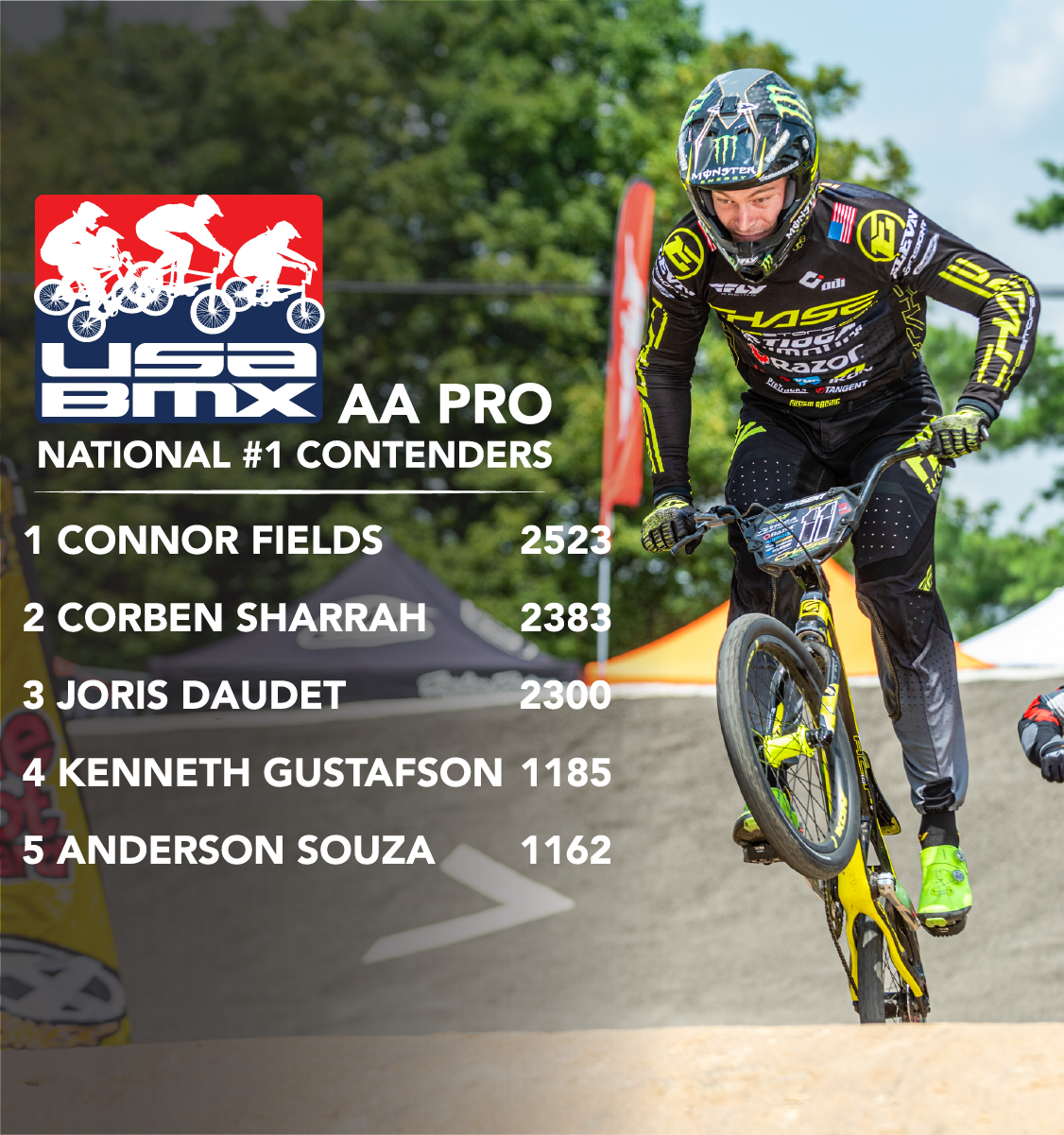 WOMEN PRO
In what may be the most exciting matchup of the weekend, Alise ‘The Beast’ Willoughby will square off Supercross’ Flyin’ Felcia Stancil. With only 184 points separating the two, this year's Alise-vs-Felicia match-up should provide for the best storyline come Saturday evening.

Felicia has been the definition of consistent in 2018 and 2019 as she made the finals in 12 out of 12 international competitions. In addition to her ‘mains making’ streak, Felicia has owned these international semis netting either a 1st or 2nd in each with the exception of 2019 World Cup in Rockhill.

While many may be rooting for the underdog Stancil, unseating Willoughby will be a tough task. Alise is in search of her unprecedented 8th National No.1 Pro title. With a win on Saturday, Alise will cement her legacy as the most decorated BMX racer, male or female, of all time with a 12th National Championship. (*Four of those were as an Amateur.) 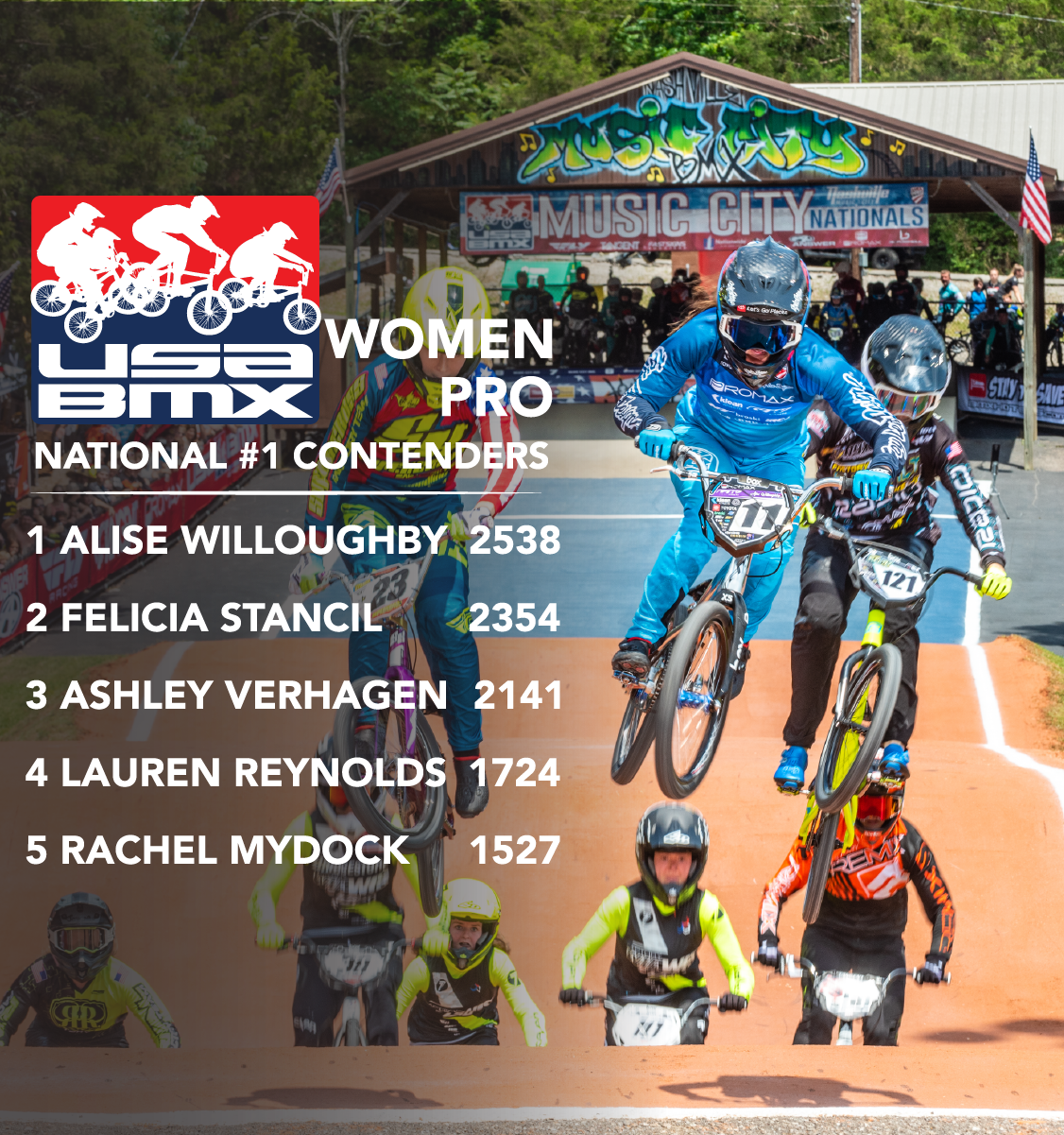 VET PRO
In what should be a repeat match up of the 2018 Vet Pro title final, DK Bikes Tyler Brown and Venezuela’s Jonathan Suarez will be battling for supremacy again on Saturday night. With just 146 points separating the two, the ‘World’s Fastest TO’ and the ‘Mosquito’ will be looking to highlight a class stacked with rising Vet class stars like Josh Smith, and South American superstars Miguel Castro and Carlos Manrique. 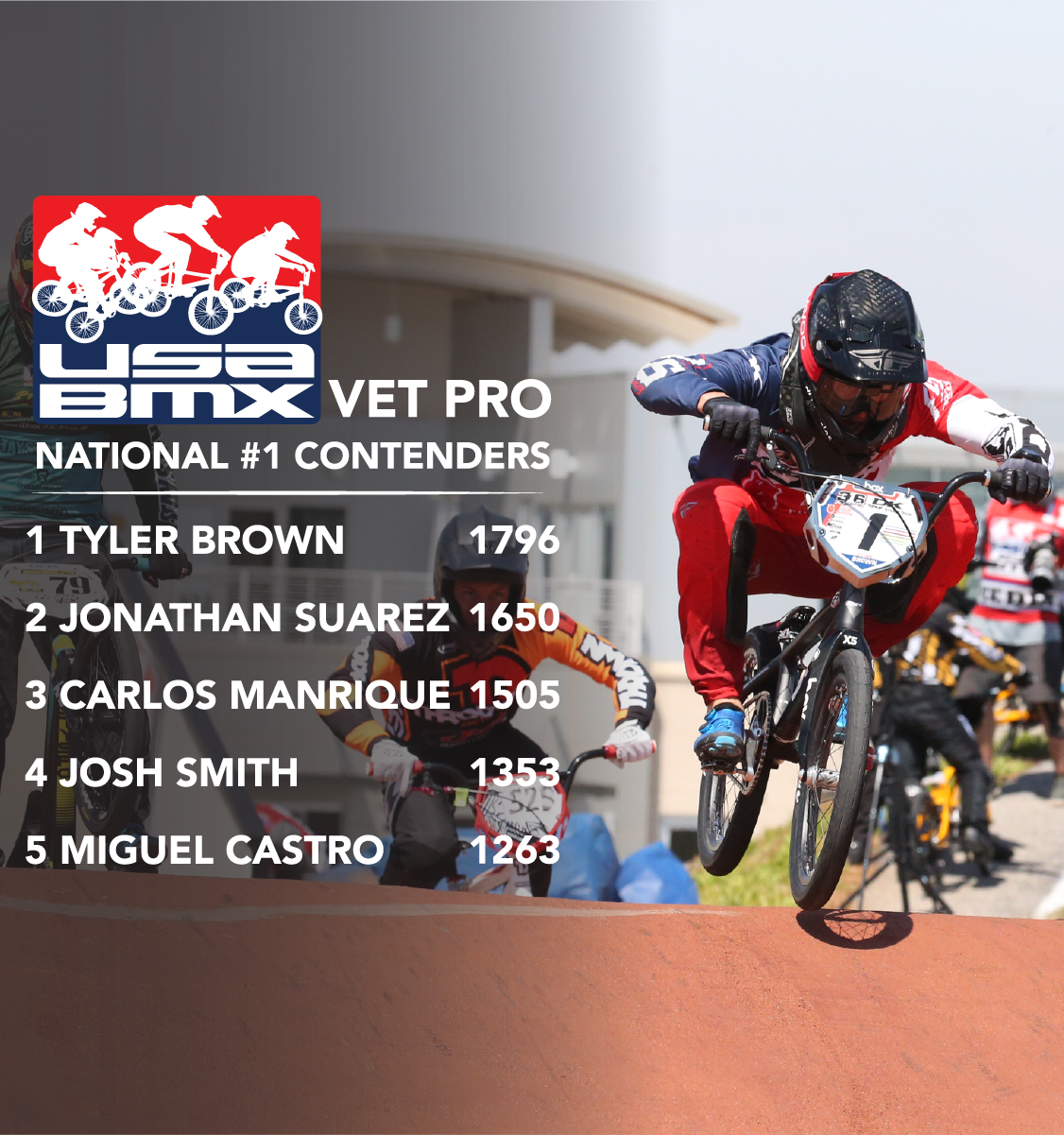 No.1 AMATEUR
In what will likely be a title chase decided by a showdown in the 17-20X class, the USA BMX No.1 Amateur title is a super tight race between ThrowDwn’s Jesse Welch, Alpha’s Cam Wood and Full Tilt rider Kye Affoo.  Welch is in the driver's seat at the top of points, and has previously won the No.1 Am title. But only five points separate these 17-20X riders, making it certainly thee title chase to watch this weekend.

If Australia's Kye Affoo, racing for FullTilt, wins the No.1 plate, it will be the first time the Amateur title has gone to a foreign rider.

In UCI Jr. Elite, Alpha's Cam Wood has owned it all year, winning nearly every single race he's entered. And while Riley House would be the long-shot, we saw what happened in the 2018 17-20X final last year that led to House taking the final and NAG-1 plate. 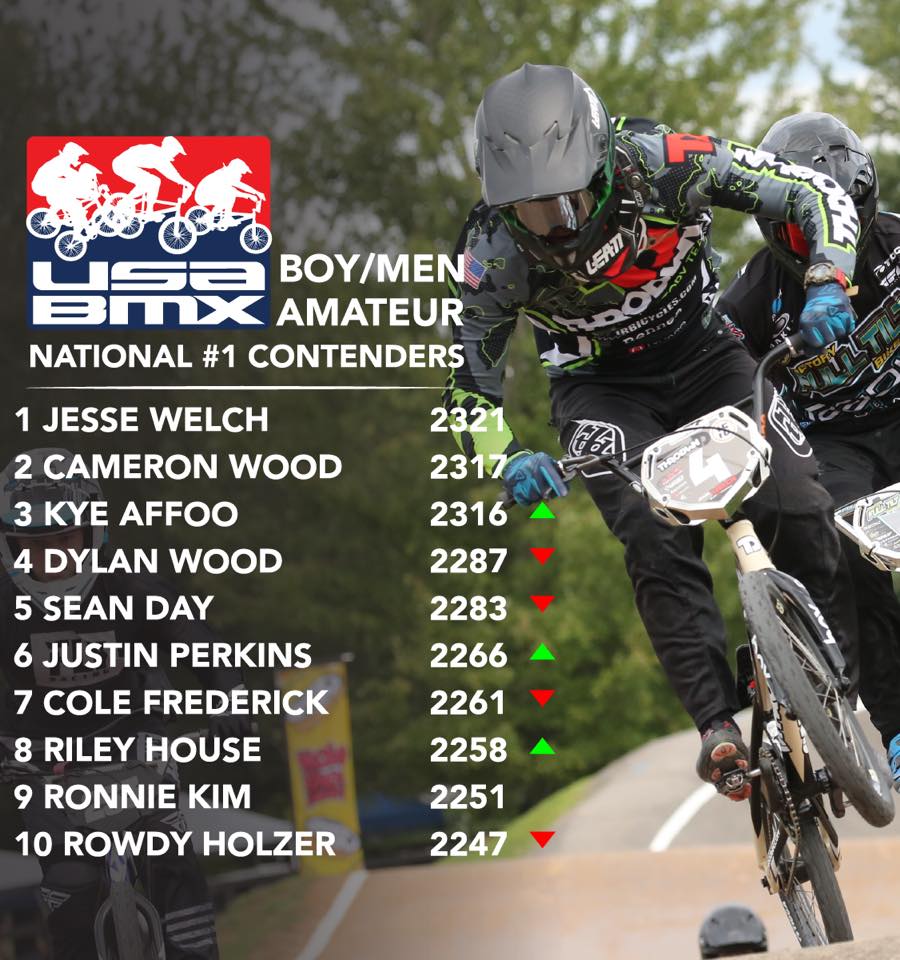 But as past Grand Nationals have taught us, you should never count out the other young experts, like defending National #1 Amateur Ronnie Kim in 13X, or Sean Day and Cole Frederick in the 12 year old ranks. In 10X, the battle to watch is between Wia-Wis’ Rowdy Holzer and Supercross’ speedster Justin Perkins, who sits in sixth.

No.1 GIRL
Never before in USA BMX History has a foreign racer won the Overall National Number One title. Many have tried, a few have come close - but the Number One amateur plates have always gone to an American.

That record could very well be smashed this weekend (not only once, but in three of the Am Championships). BMX Canada’s multi-time Number One Girl - Teigen Pasqual (racing for Rift-Tangent) has been ruling the 15-16 Girls class all year long, has a slim lead over the rest of the Top 10 riders. She would love to add a big silver Cup to her trophy collection before she begins her Tokyo Olympic quest.

But remember - this is a stacked Girls’/Women’s class, and the 17-20 Women have some fierce competitors with Stephani Morin, Tucson’s Daleny Vaughn and Oregon’s former two-time No.1 Champ Olivia Armstrong. 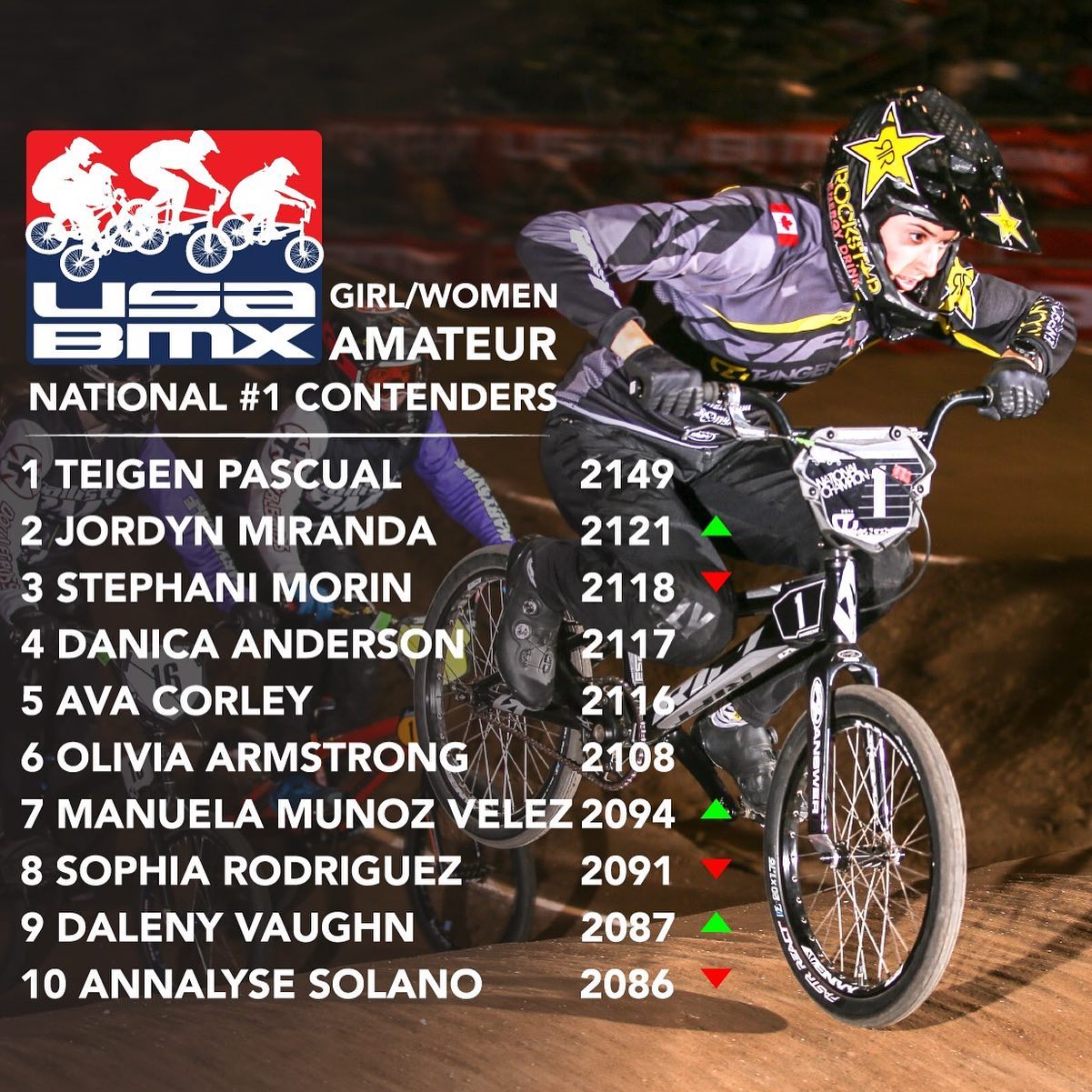 But two other classes may have a lot to say about the National No.1 Girl title. In the 14X class, BMX Shark Jordan Miranda will battle Manuella Munoz for the title chase. And with the right rider-count in 12-Girls, Triple-A Fire’s Danica Anderson could make history by joining both Dominique Daniels and Alise Willoughby by doubling National No.1 titles in Girls Am and Cruiser.

Currently, your points leader for the National Number One Cruiser plate is seven-year-old Knox “The Ox” Perkins. With a ten point lead, The Ox is out to become the youngest rider in BMX history to earn himself a Big-Wheel Championship. 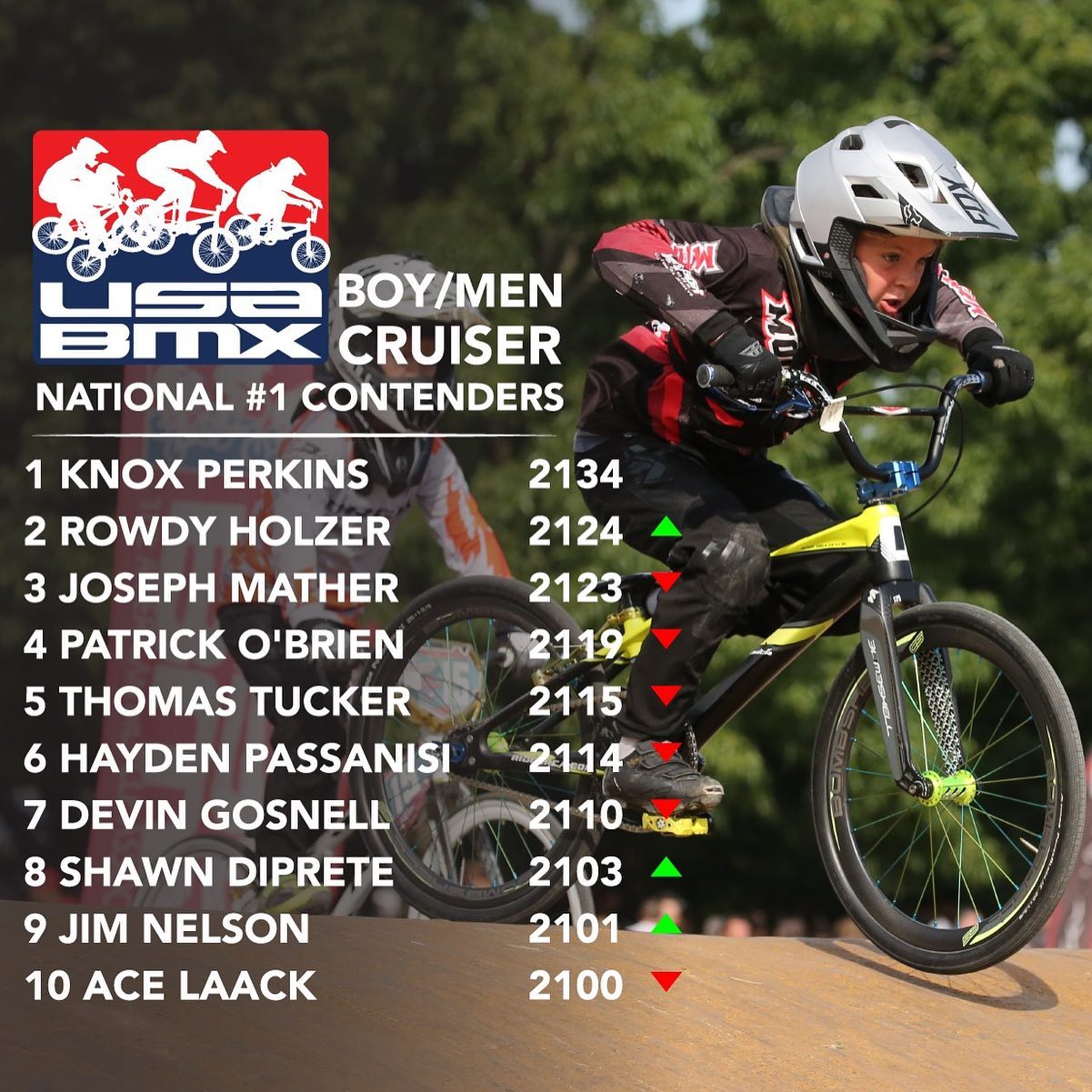 But don’t forget - this is The Greatest Race on Earth, and we’ve got plenty of courageous contenders in the hunt for the overall Number 1. Ten year old Rowdy Holzer sits in the Number Two spot of points and has been dominating all season long. ThrowDown’s Joseph Mather has also been ruling the eight year old cruiser class, and would love to take home the title to Nebraska for the very first time in BMX history. Earlier this year, Holzer and Mather were named by Pull magazine as members of the Terrible-Ten and Unders.

Up until last weekend, we had been looking forward to the 14-year-old cruiser battle, between Australian import Tommy Tucker and American P.J. O’Brien. P.J. had been having the best year of his career, but unfortunately crashed hard in his very last pre-Grands practice sesh - and won't be able to make it to Tulsa. Could Tucker become the first-ever Foreign amateur to win a USA BMX National No.1 Crusier plate?!
We’ll soon find out.

And while this title has seen a surge of youth in the past few years, you can never count out C-Yaa’s Shawn DiPrete, 2013 Champion, and Nor Cal’s Elite Bicycles Jimmy ‘The Bus Driver’ Nelson who are both within striking distance in the 46-50 Cruiser class.

Will 2018 champion Danica Anderson repeat in 2019, while also chasing history to nab two National No.1 titles this year? In a class where the top 10 riders are separated by just 53 total points this title chase should be an exciting one to watch this weekend. 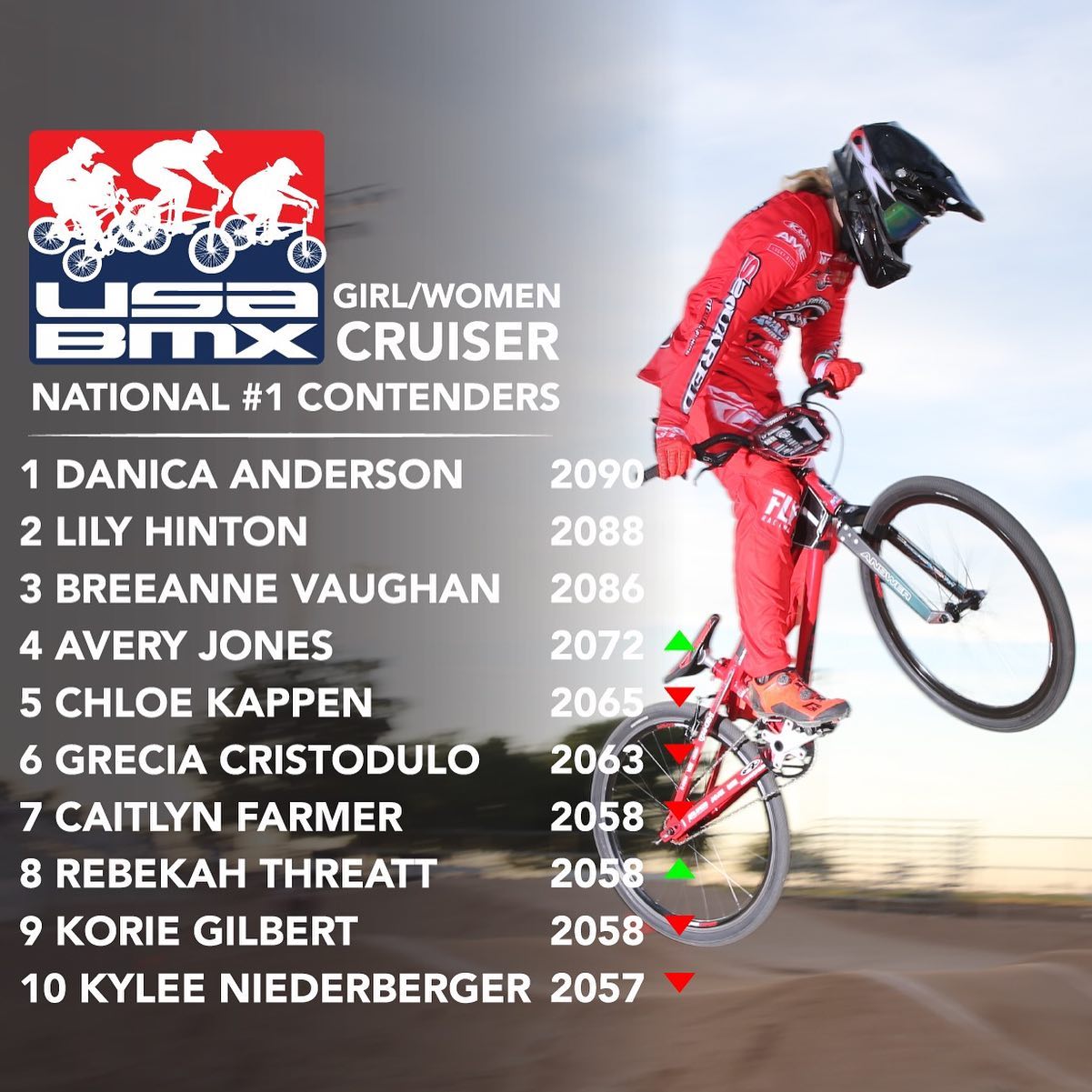 If you didn't make it to Tulsa, along with over 3,000 riders from all over the World, you can always watch the action online - at either USA BMX's website, Facebook page or YouTube channel (@ youtube.com/usabmxvideos).

It's a non-stop weekend of action-packed racing, with a LOT on the line. It's why this event has been dubbed "The Greatest Race on Earth"!