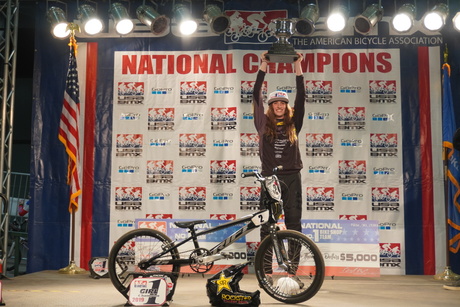 With National #1 Titles in the bag for pros Alise Willoughby, Connor Fields and Tyler Brown, the BMX world turned its attention to the GoPro Grand National Finals on Sunday night in Tulsa. As the ams navigated motos to their main events, a year’s worth of hard work and sacrifice were on the line.

In a class where the top 10 riders were separated by just 53 total points, Danica ‘The Avalanche’ Anderson erased all doubt in just the second cruiser main event of the evening to repeat as the USA BMX National #1 Girl Cruiser.  In control from the start Anderson extended her lead in the third straight and added a little flair over the last double with a cross up before cruising to her title victory.

By securing the National #1 Title in her Grands cruiser finale, Anderson positioned herself for a historical night. If she could secure a class win the ‘Lil Avalance’ had a chance to join an elite class with Dominique Daniels and Alise Willoughby as the only females to double-up National #1 titles in Girls Am and Cruiser. But Anderson wound up second in her main event and out of contention. 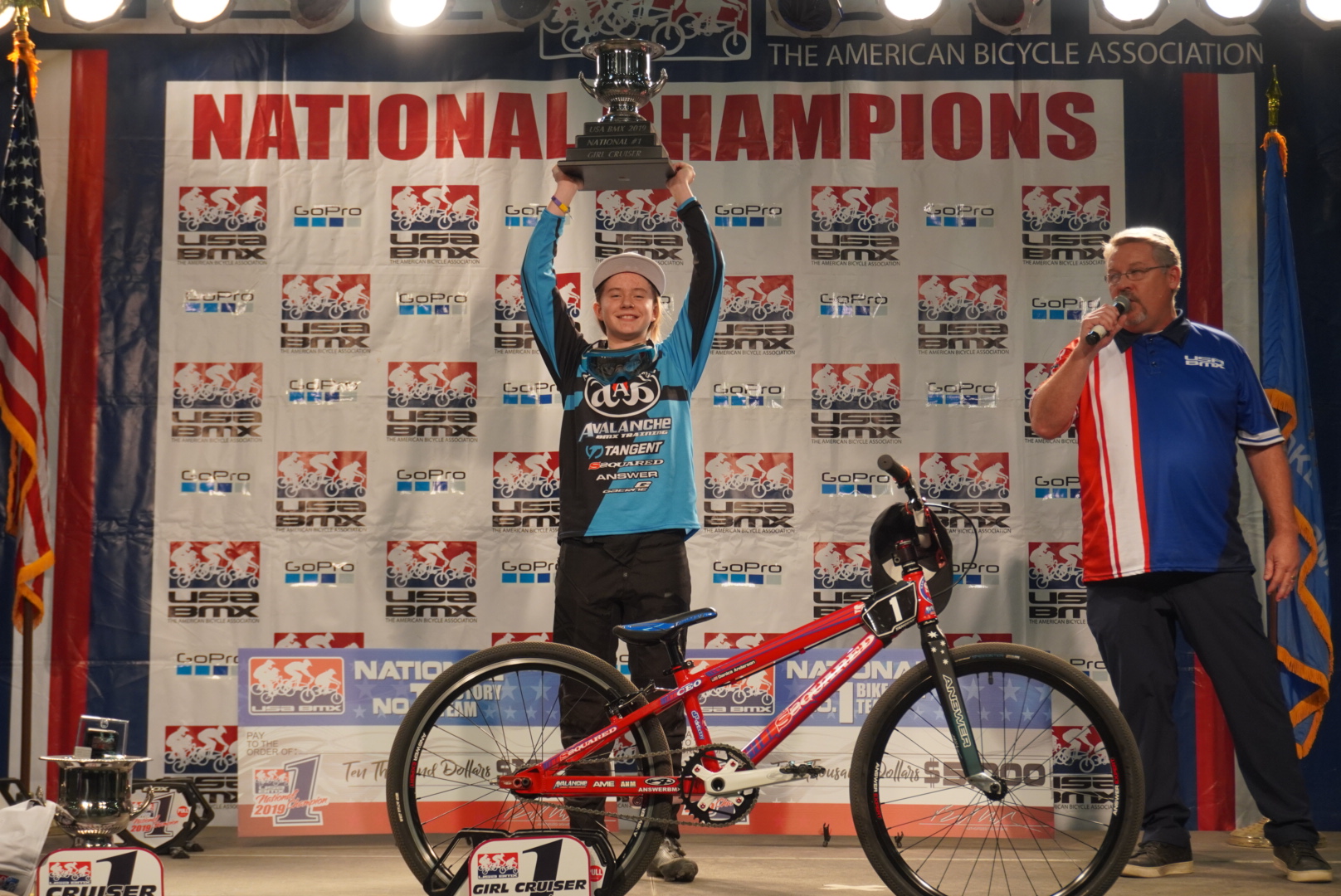 As the evening continued to unfold, the ‘rowdy’ Tulsa crowd was set for another historical moment. Knox ‘The Ox’ Perkins took the win in 7-Under cruiser to take the overall points lead in the Boy/Men Cruiser chase. The Ox positioned himself to become the youngest rider in BMX history to earn himself a Big-Wheel Championship.

But it was ‘with and win, and only a win’ that Rowdy Holzer sat in the gate. And sure enough the WiaWis Factory rider Holzer dominated from the start. As Rowdy extended his lead out of turn two the crowd chimed in, and Holzer took home the National #1 Boy/Men Cruiser Title with ease. 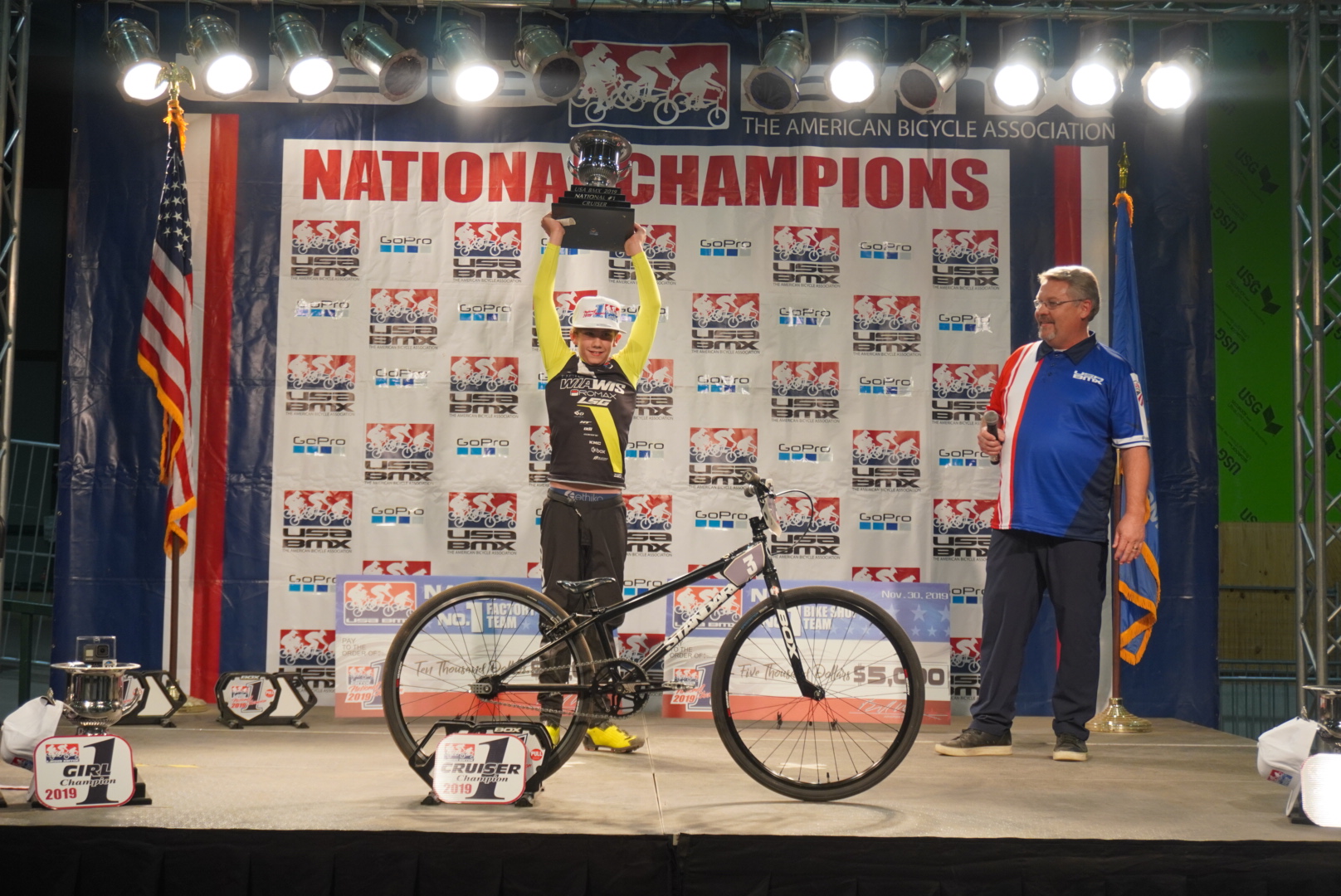 There was a chance that back to back National #1 Girl Cruiser Danica Anderson could double up at the Grands. As she took the early lead in her 12 Expert Girls main event it looked like history might repeat itself. But it wasn’t meant to be as Anderson slipped to second and out of contention for the National #1 Amateur Girl Title.

But tonight wasn’t about repeating history, it was about making it. And Canada’s Teigan Pascual was ready. As the Rift/Tangent rider took the gate in her 15-16 Girl main event she ‘needed a win and only a win’ to become the first foreign female rider to earn a USA BMX National #1 Amateur Girl Title.

With a pop from lane two, it looked like Pascual would get squeezed headed into the first turn. But she emerged from the pack unscathed, and never looked back as she held off a late by her good friend and fellow Canadian Molly Simpson. With the win Pascual, also the current Canadian National #1 Girl, writes her name in the annuals of USA BMX history with her 2019 title. 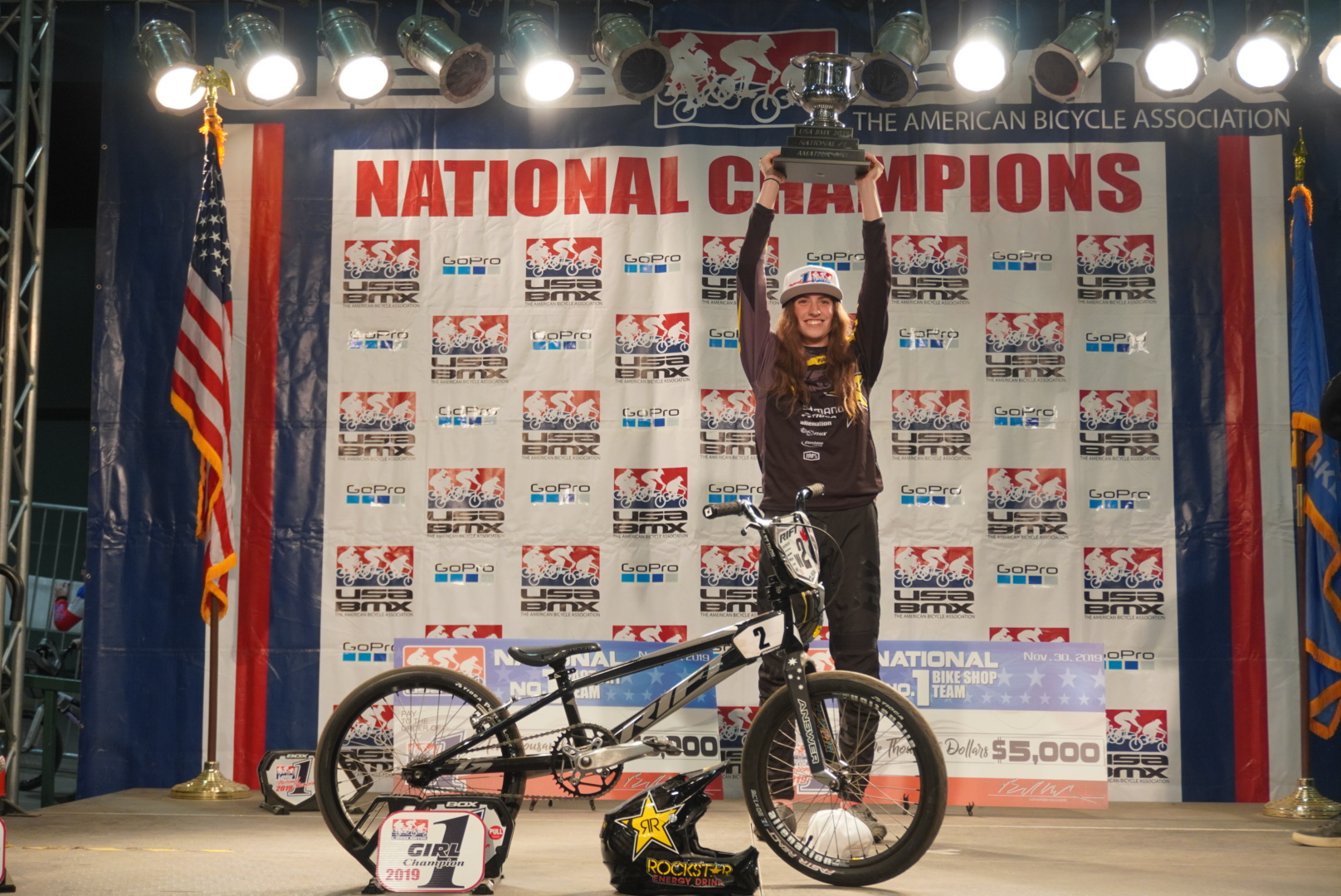 It was no secret that many predicted the National #1 Title would emerge from within the 17-20X class. What no one could foresee was that points leader Jesse Welch wouldn’t make it out of the 8ths. But it wouldn’t be the Grands without a little drama.

Sure enough, as the 17-20X boys loaded the gate there were three riders (Afoo, Wood, House) who could overtake the latest points leader in 12X Sean Day. Out of turn one, Full Tilt’s Kye Afoo and Race Lee battled for the hole shot, but it was Supercross’ Riley House who took a left turn and sent it over the GoPro pro set. His gamble paid off and House emerged from turn two with a lead he would never relinquish on his way to his first USA BMX National #1 Amateur Title. 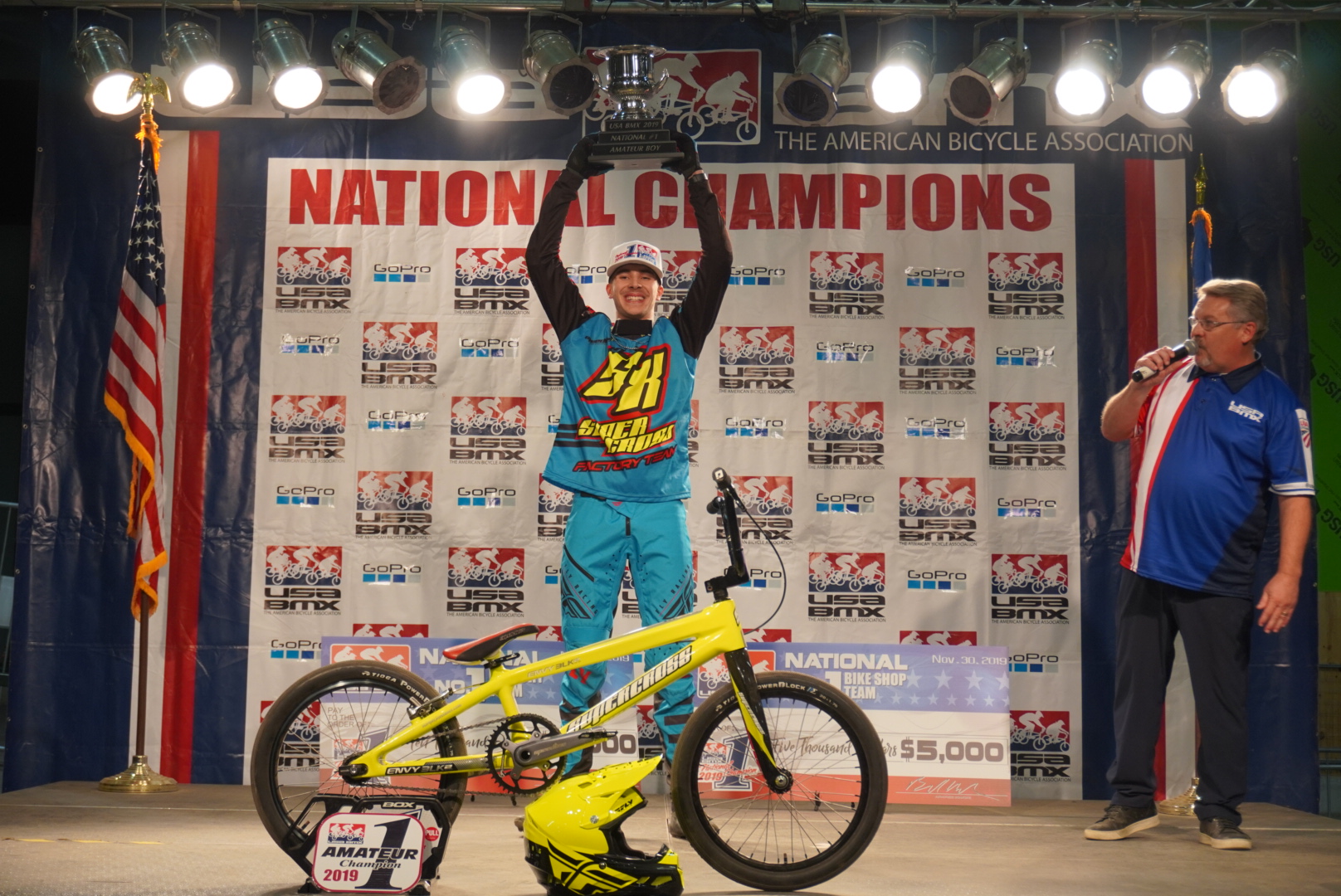 As the season came to a close the chase for the National #1 Bike Shop Team saw four teams separated by less than 400 points. The race was too close to call heading into Grands, but over the four days in Tulsa the JRBicyles.com Speedco/Avian team separated themselves for the win followed by Bay Area BMXers and BMX Sharks.

With the win, JRBicycles.com extends their USA BMX record to an 8th National #1 Bike Shop Title. 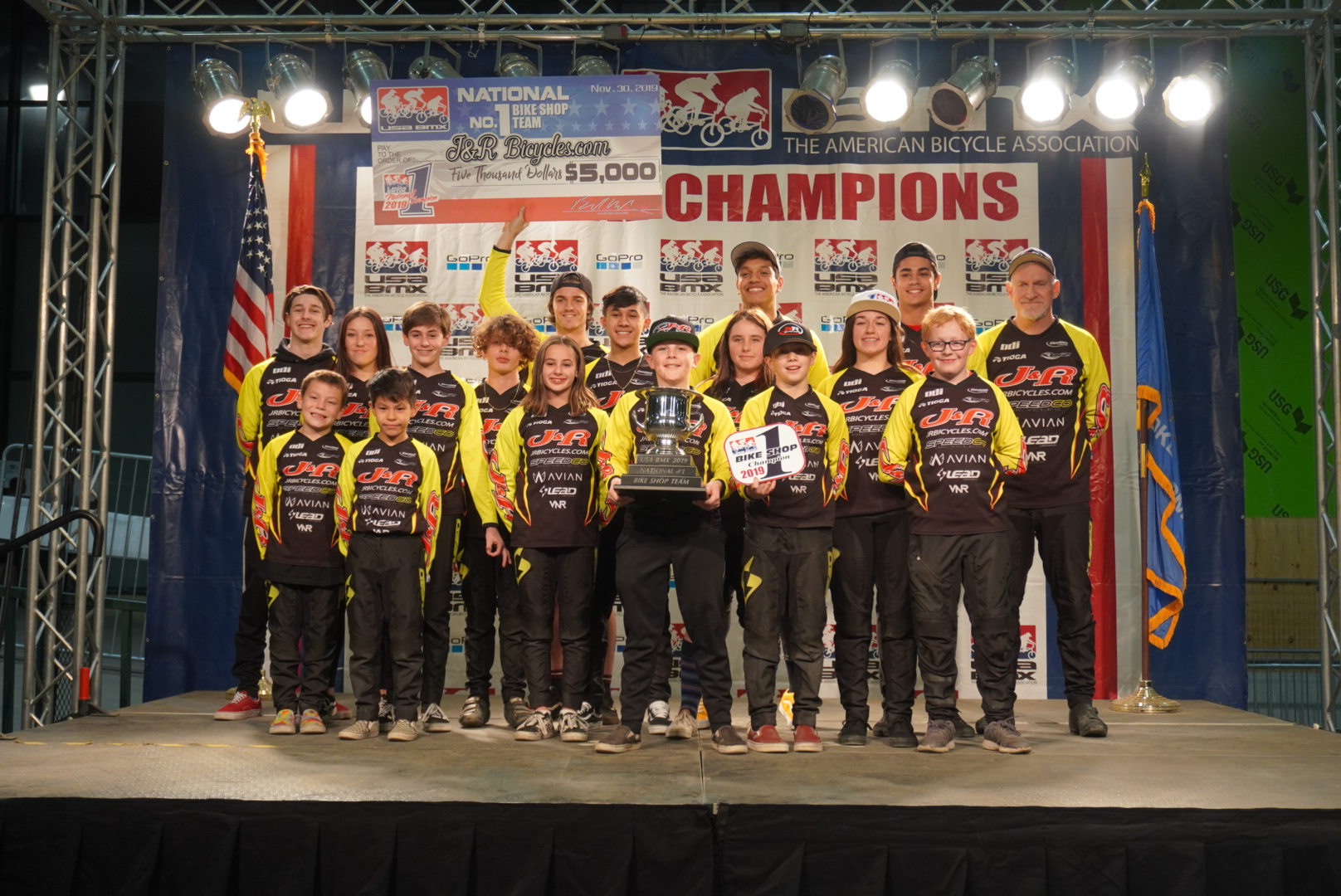 Factory Full Tilt Radio entered Grands with a comfortable factory team lead and never looked back. Factory Full Tilt scored their first title in 2018 and now have bragging rights after their back to back crowns as National #1 Factory Team. Congratulations to Factory WiaWis LSG and Factory Answer who rounded out the top three teams in 2019. 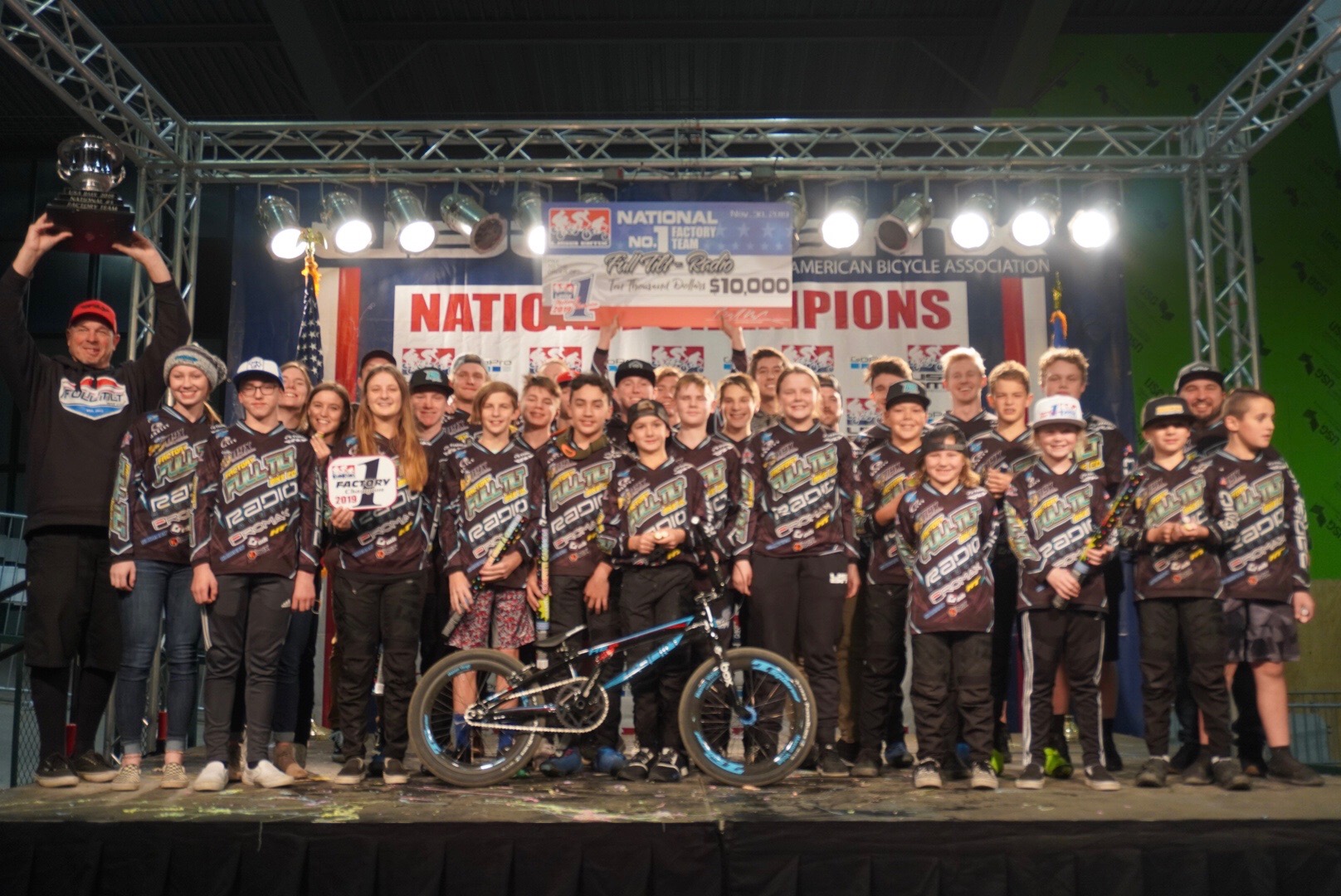