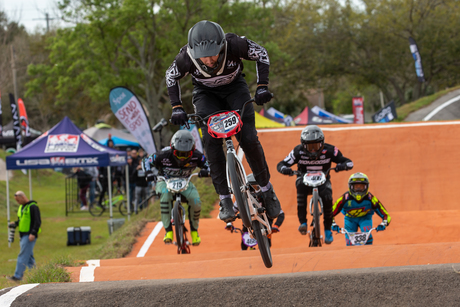 Last weekend marked the kickoff of the 2020 GoPro North American Supercross series and was the second stop on the USA BMX Pro Series. Racers were greeted with unseasonably chilly temperatures, gusty winds and grey skies.  Mother nature through a curveball but didn’t stop the die hard racers in the Sunshine State.

A-Pro
Just a week prior the world witnessed the emergence of defending National #1 amateur Riley House and his absolute dominance in his new class. Friday would be much of the same with the Rockstar/Rift/Tangent racer running away with his third consecutive win. Saturday he would experience a drivetrain problem during qualify that had him near the bubble of even qualifying for the main event. He would find himself in the main but stuck out in gate 8. This wasn’t a worry for him as he won the Grands from gate 8 as well. When the gate dropped Ruben Garcia quickly found the front of the pack after leaving gate 2. House would get a good start but would get held on the outside all the way into turn one. Garcia would hold the lead down the second straight with Yess’ Cam Moore in hot pursuit.  Those two would stay in the same position until the finish line but the battle for the third spot continued behind them. Another Florida local, Rogerio Dos Reis, would barely hold off hard charging local Tyler Klumper for the last spot on the podium.

A PRO Day One

Vet Pro
Fans were definitely surprised when motos were posted on Friday night and the defending champion Tyler Brown was no where on them. All eyes were then on Alpha’s Jonathon Suarez. The Venezuelan transplant who now calls south Florida home continued his winning ways from Phoenix and captured two more wins. This guy is serious about winning the title this year without a doubt. Florida is also home to several other top Vets including Miguel Castro who would find himself on the podium boith days with a second and third and Carlos Manrique who would grab the second spot on day two. DK’s Josh Smith would find himself in third on Friday evening after the “French Texan” Damien Lacombe slid out in the second turn trying to go from third to first. Almost.

Nine of the toughest young ladies around hit the gate Friday in search of points that would qualify them for Team USA and an opportunity to represent at the World Championships in May. Floridian Mckenzie “Skittles” Gayheart was one of the favorites coming into the weekend and she delivered a big win on day one. UCI Pump Track World Champion Payton Ridenour had the early lead but gave up the lead as the ladies arrived at turn two. Canadian National Champion Molly Simpson would slide in for a third. On the second day Payton would hold onto the lead the entire lap and keeping her new sponsor Mongoose elated.

The showdown between Alpha’s red hot up and comer Brayden Kempel and M&M Racing’s Vincente Garcia Pinto these two went back and forth all weekend long. Pinto had pole position on Friday in the main and shot out of gate one in the main event. Kemple was languishing right behind the Brazilian and went right on by with some silky-smooth manuals down the third straightaway. Black Widow’s James Plummer would finish in the third spot. The second day of racing brought the same top two finishes with Kemple taking it from gate to finish line. The real race was between Daylight teammates Zach Jacobs and Amakye Andersen. Jacobs would move slightly to the outside of the third straight allowing his teammate Andersen to squeak by.

Surprisingly only six Elite Women showed for the big bucks in Florida. With $20,000 purse money up for grabs on the weekend the fans were certainly disappointed. Despite the small turnout the ladies still put on a great show. DK’s Carly Kane made her debut in the class and unfortunately for her it was a quick one. She went down in a blaze over the first jump and ended her weekend in the first moto of day one. Heal up quick!
This race was World Champion Alise Willoughby’s first race of the year on the USA BMX series and she didn’t miss a beat. Nothing but aces for the winningest racer of all time. With no Brooke Crain in attendance, Full Tilt’s Ashley Verhagen stayed consistent and seized the points lead after a pair of seconds on the weekend. Aruba’s Shanayah Howell took third place honors each day. The 2020 title chase is already heating up!

Corben Sharrah was untouchable in Arizona and continued his streak in Florida. The Daylight rider is now 4 for 4 and shows no signs of slowing down. His toughest competition came from Florida locals Jeremy Smith and Anderson Souza. Smith is on the verge of his first Elite victory and we predict it will come some time this season. Souza led a lot of laps during the weekend, but small mistakes kept him from challenging for the win. On day two Australian Josh Mclean had a great lap and finished in the second spot.