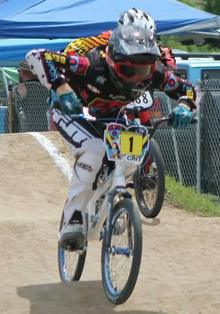 I started riding a bike before I could even run at 2 1/2 years old. My parents took me to a race to watch when I was 4 yrs old and I was hooked. I started racing soon after when I turned 5.

I have had a lot of success over the years and I have been winning a lot since I started training more for racing. I've been the Ohio State Number One six times over the years, but due to the time commitment of my father serving on the board of directors for AKRON BMX we were really unable to travel to many nationals to compete. That all changed in 2013 and my father took me to some Redline cup races. I ended up earning Regional Number One for 14 intermediate and was able to run a Gold Cup #1 plate for the 2014 season.
Midway through 2014 I moved up to Expert and I am now one of the fastest riders at my home track of Akron BMX. This year I went into the regional finals in SC in a multi-rider tie for third place (there were also multiple people tied for first and second - so it was more like 9th or 10th). I raced hard, but because of a large pile up I failed to earn the plate I wanted, I did fight hard end up fifth in the region - just one point out of third place!

During 2014 I also raced the local cruiser class from time to time, but since there weren't always others my age to compete with it was more for track time and exercise than trying to win. I really tried to stay focused on running my 20" class.

The last few years I was sponsored locally by Beeteem Sports in the Ohio State Series. I hope to join a national team since I will be stepping up and racing more nationals in 2016 and look forward to going to the Grands for the first time.

In my off time I like to ride trails, park, street, road bikes, and mountain bikes to improve my skills on the track and for fun. Over the winter I try to attend indoor races in Dayton (3 hrs away) when I can and I also go to Ray's Indoor MTB as much as possible.