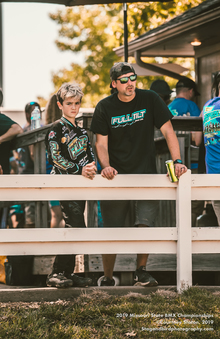 I'm a wild and crazy dude that loves to ride anything with two wheels. I started BMX racing on the strider. When I was two years old I tested a micro at my local track, Raytown BMX (Kansas City, MO) and HAD to have my own.

In 2013 I was the youngest Gold Cup main qualifier at 3yrs 2mo old.

I moved into the Intermediate class at Gold Cup in 2014 right before Grands. I've learned a lot and am really loving getting faster.

I moved into the expert class by winning my fifth national at the Sooner State Nationals. I raced the 6x class on Sunday and with that finish I was able to earn the President's Cup award against some very fast 5&under racers.

I also LOVE to race motocross. I love to jump and have such a fun time at the track, whether it's BMX or MOTO.