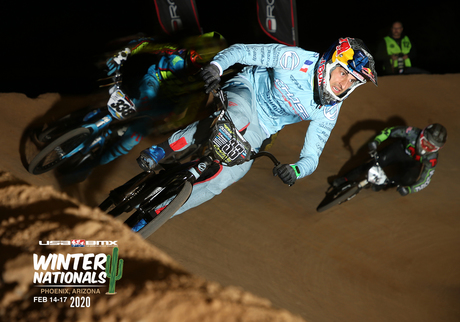 For the fourth stop on the 2020 USA BMX circuit, we took things outdoors for the first time, landing at a familiar favorite of racers young and old - at the legendary Black Mountain BMX!
After our first three Indoor races have been held on short tracks, Black Mountain's 1,200+ foot long track would see who's in shape, and who was winded by the white line.

During the winter, Mike Tradup and his crew made a few changes to the second and third straights, which everyone seemed to love. With Arizona having more rain than normal this winter - including just one week before this event, there was plenty of tarps and sand bags scattered down every straight and all of the white chalk-lines had been washed away. Regardless, with plenty of room for campers and a large pit area, this is a perfect venue for a 280-moto national.

This also happened to be the first GoPro Series race of the season, with UCI points on the line to help riders gain some ground toward Olympic qualification. This weekend is always looked forward to, especially with the debut of the Rookie Class of 2020; which looks like they could possibly be "The Future" superstars of our sport. Riders such as Riley House (making his Tangent-Rift debut), Cam Wood (making his Mongoose debut) and Daleny Vaughn (making her 316-DK debut) could very well be the Next Generation of BMX Pro - ready to take things over when the current decade if pros decide to retire. 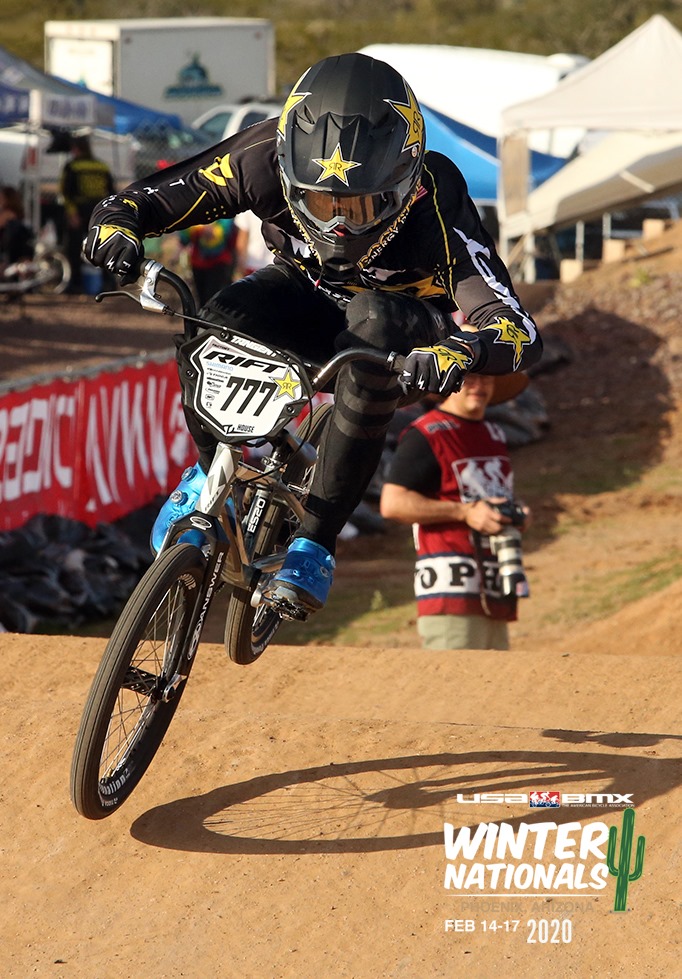 Just as we knew he would - the reigning No.1 Amateur in USA BMX has gone pro. And his A-pro debut was also just as we expected. Riley House owned things in single-A, and made many wonder why he didn't just go straight to AApro like his rival Cam Wood did.

In Vet Pro, it was the grands re-match all over; only this time there was no controversial last-turn tangles. And by the looks of things, it seems that "The Mosquito" - Jonathan Suarez has spent his winter training hard for another serious run at the No.1 Vet Pro title. Chalk up the first two wins for Suarez.

With the new 30-year-old rule in the Vets, we were all looking forward to seeing which young-guns would join the class full o' Masters. Tyler Faoro was mong those who switched to Vet, and was looking good until a moto-crash in the rhythm took him out for the rest of the weekend. Throdwn's Matt Wilcox had also made the change, moving up from older amateur to Vet, and he found himself on the third-rung of the podoium both days.

In Junior Women, we are pleased to see a whole new crop of talented young ladies joining the Junior ranks. Among them, most prominantly, is Tangent-Rift's National No.1 Girl (in both the U.S. as well as Canada - for the first-time ever) - Teigen Pascual. Not since Samantha Cools has a girl so fast come out of the Great White North. Teigen picked up right where she left offf last November, and was ruling the Junrio ranks all weekend.

That's not to say she had no comp - there was plenty. Last years winner - and a Black Mountain local. Lexis Colby, was bussin' the back knobbies of Pascual's Rift, and the two were closely followed by another new-comer to the Junrio ranks - Natalee Daugherty (who for the time being, is running privateer colors).

In the Elite Women ranks, it was an Alise-less weekend, which always leaves the field wide-open. And that meant that two-time Olympian Brooke Crain could rule the roost, as the lone Haro rider at the Winters. She would hold off the charge of Arizona local Ashley Verhagen and Rookie Pro Daleny Vaughn to get the wins both days. It was obvious by the cheers from Tucson that Vaughn was the weekend favorite, and she lived up to the hype. 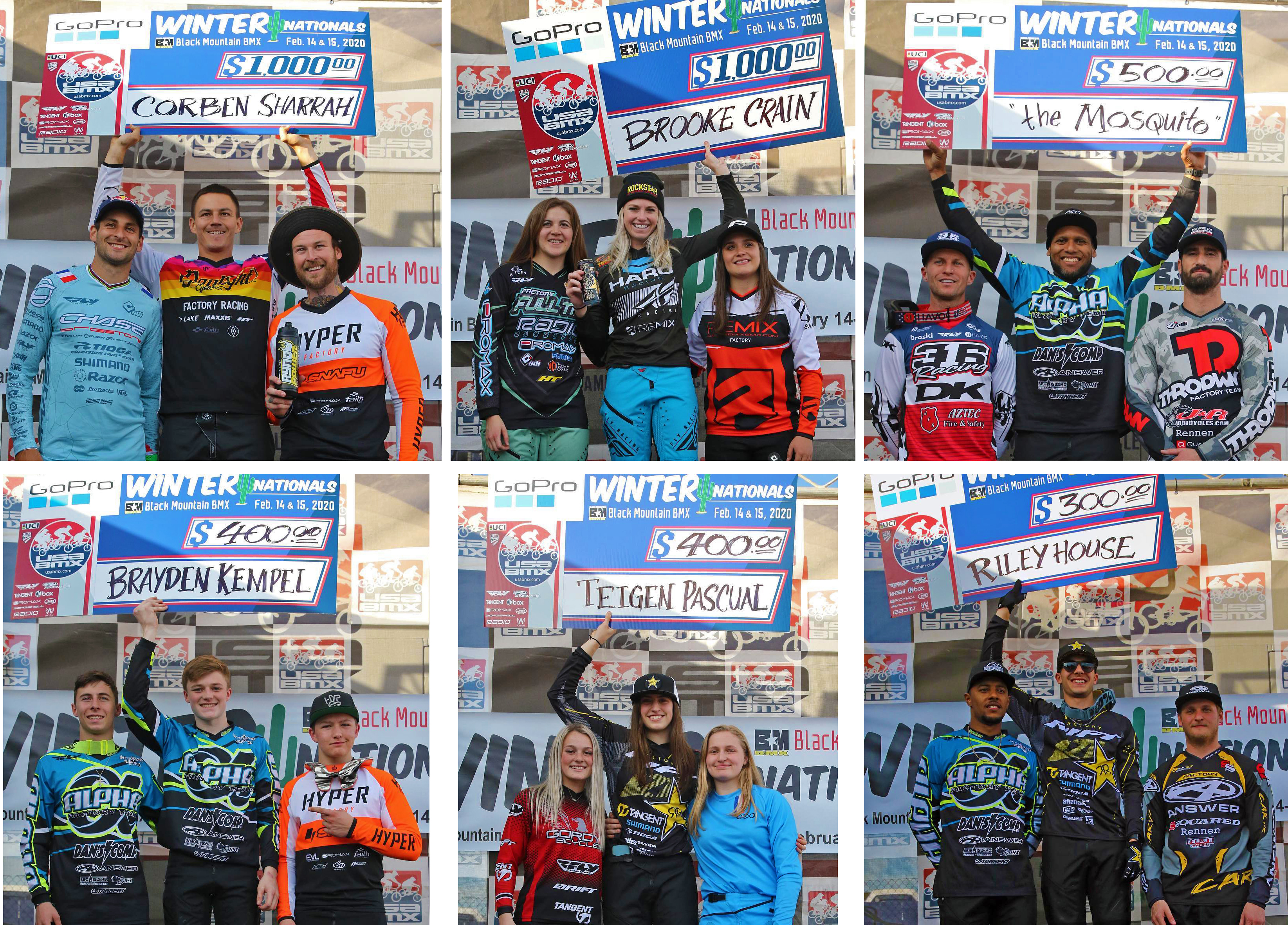 Surprisingly, the Elite classes were a tad low on the turnout; mostly due to the majority of them returning from the long flight from Australia - where nobody did much racing in Round-2. With only 9 Elites on hand, the motos had no moto-fill, and was still action-packed. Daylight's Corben Sharrah again took the first win of the year, for the second year in a row. This weekend, he was pretty much unbeatable and barely lost a round either day.
That's not to say he didn't have any comp - as new 2020 Rookie Pro Cam Wood (Mongoose) was giving Sharrah the best run for his money. It was impressive in the first round to see Wood nab the holeshot, while Corben sat in the 2-spot, releaxed, and just waiting for his moment (and experience) to strike.
After missing Grands from his busted collarbone, Chase's Joris Daudet was back - and looked a bit rusty after so much time off. The Flyin' Frenchman seemed to be playing it safe. Considering it's an Olympic year, who can blame him? On day two, he squeeked out a 2nd place behind Sharrah.
Hyper's Nic Long scored third place scores both days and was pumped. "For me, that's a win," he joked. (or was he serious?) 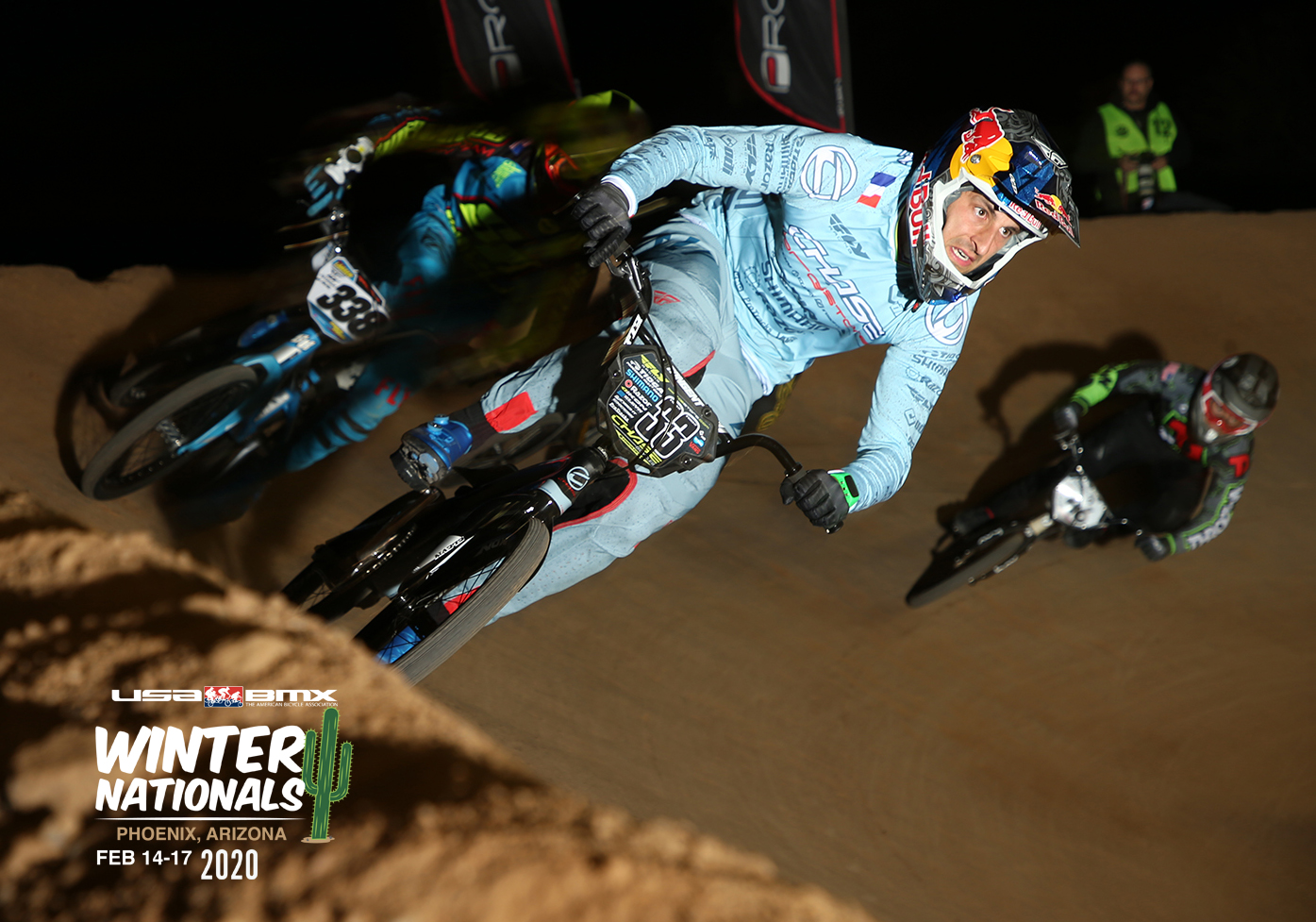 Junior Men also saw some new faces, as last year's Dominator aged-up into the Elite ranks. That leaves some fresh new faces to the Jr. ranks. Alpha's Brayden Kempell took the victory on Friday, while Tangent's Nic Adams scores his first big win of 2020 on Saturday. There's no doubt that we'll see these two go at it all year long.

There was def more than just Pro performance going down at Black Mountain; and we had nearly 280 motos on Saturday chalk-full of awesome Amateurs, puttin' on a show in their quest for National points, big trophies or saver stamps. Among those standouts, winning multiple times, were:

A TRIPLE & A DOUBLE: